Havent posted for a while but things are starting to get exciting!

The plan for this year was Varne Ridge Channel Swim camp, relay, solo. First week of june was the swim camp, and it was awesome! Just backing up a fraction, I was getting a little aprehensive the sea wasn’t quite warming up as Id hoped so put in a big week or ten days in the pool (including a six hour) which made me feel a bit better! Then had a bit of an easy week before the camp.

Turns out the last day before I left was great conditions for swimming across to Ogmore so we did that; longest time in the sea for quite a while! Temp was fine…but it was playing on my mind a little bit how I would be able to nearly triple this at camp!

So to Dover! Its a big drive but camp starts with pizza night so was a reasonably relaxed drive down, followed by finding my awesome house mates Andrew and Ness and heading up to Tracy Clark and Roger Finch’s Chalet to meet everyone else and stuff so pizza down my face! A full camp is only 12 swimmers so plenty of time to chat with everyone else and talk all things English Channel! We also had a sneaky dip in the sea just off the holiday park with the white cliffs and France in the background!!

First swim morning followed and was to be half the group swimming off the boat, the other half lapping Shakespeare beach. We went first off the boat, I dived in and swam ashore to mock a real life swimstart, ploughed straight out towards france for half an hour before climbing back aboard and repeating for the rest of the team. The water felt cool and crisp and there was a bit of chop, but all good with the swimming and a great opportunity to remind myself how to swim next to a boat. As the morning wore on the boat rocked a bit more and the sea chopped up…but everyone did great! 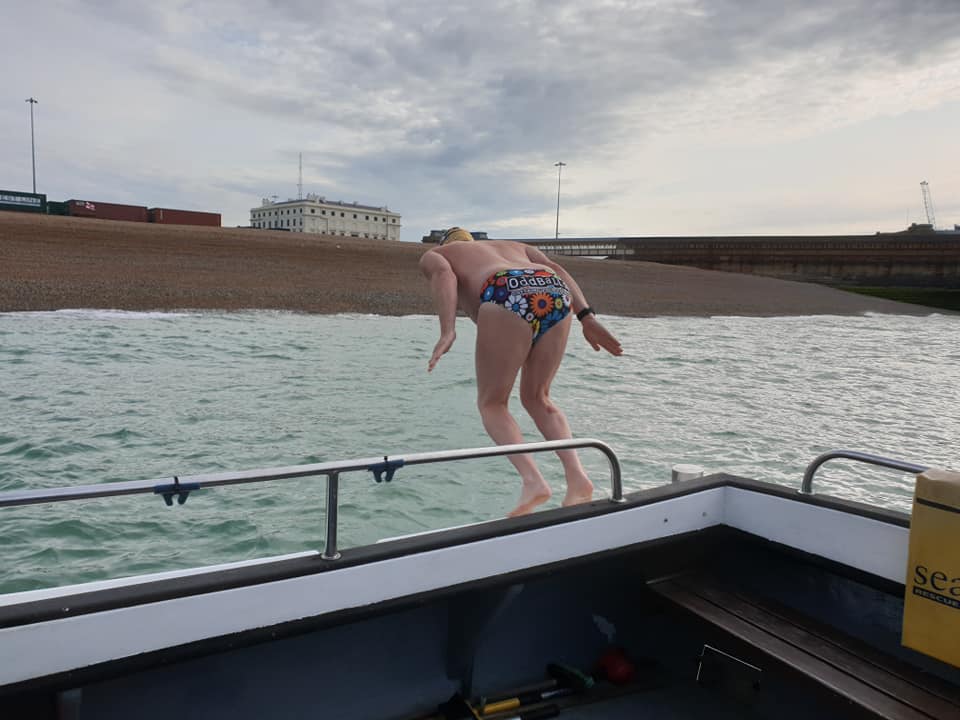 Second half of the swim, after we swapped groups, and for us was just laps of the beach. I didn’t want to push things with the thought of 2 x 3 hour and the all important qualifier (6 hours) looming. In hindsight I perhaps should have put more effort into the qualifier at the end of last season. When I signed up to the channel I was a skinny little triathlete constantly thinking about the cold….and 6 hours in less than 16 degrees is a significant cold swim! Not matter, Id gone into the winter knowing it was still to do so it just had to be done! 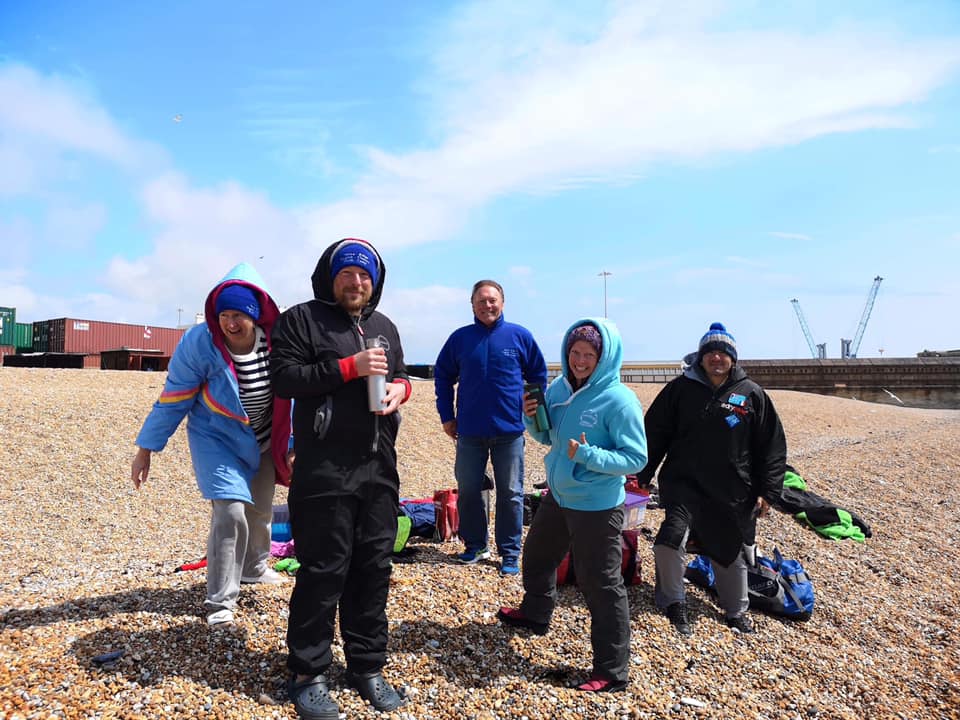 The afternoons at the Varne Ridge camp are spent listening to talks, the first one was with Stuart Gleeson, pilot of Sea Leopard. Really interesting talk full of top tips about swimming…but also tips for crewing and things to get your crew to do and not to do.

Second day was the treadmill swim! We drove down to Deal for an early start, brief was up to three hours, swimming 4 maybe 500m up the coast, turning and swimming back to the pier. The swim started great, faster one way but not much. After an hour or two we noticed it was starting to get MUCH harder to go one way than the other! As the spring tide started to run, it became harder and harder and harder!! Almost like swimming against the tide in the Bristol Channel, incredibly powerful…but the brief was three hours, not a specific distance! Right near the end we had almost stopped. Swimming in for the finish, I overshot and had to swim ‘upwind’…barely made it! All good fun tho and a three hour swim cracked! 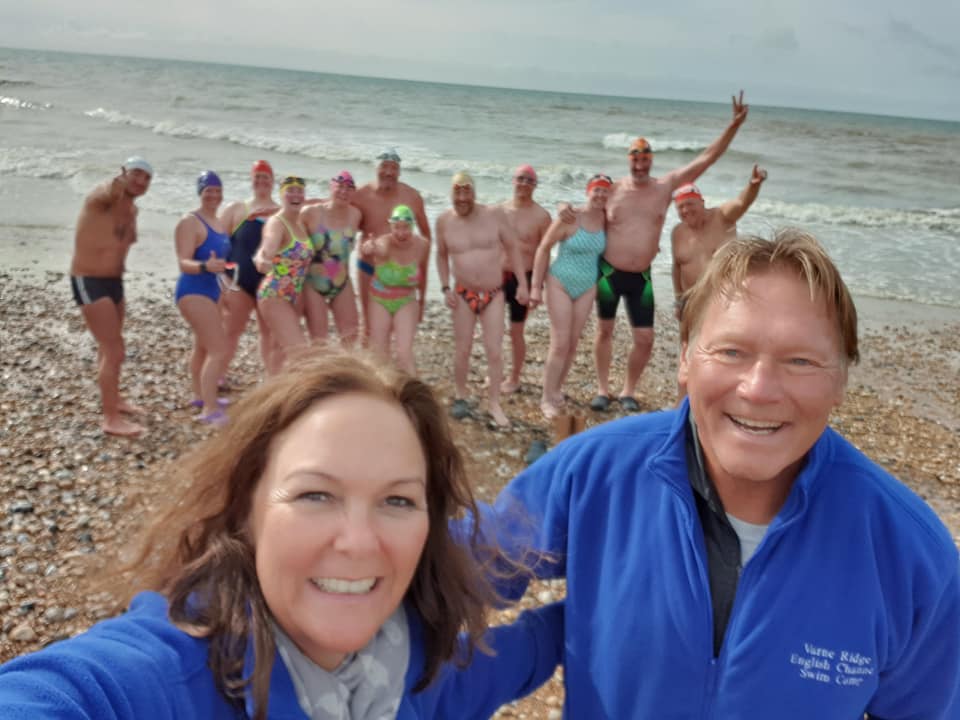 The afternoon was spent discussing further the channel and all things swimming with a lot of emphasis on getting your head in the right place and a lot of top tips regarding not measuring your own progress across the channel and not to look at time, distance etc as its pretty much irrelevant, the only thing you need to do is keep turning your arms over! This does strike a chord with me as I am very data driven and analyse (over analyse) everything. Ive noticed when things get hard, I look at every little metric on my watch and think about what’s happening. Chrissy Wellingtons book is an interesting read and she says at one point sometimes you are better to get rid of the watch and just go from the heart, you may well surprise yourself if you haven’t got your head telling you are going to fast and you know you cant do that. 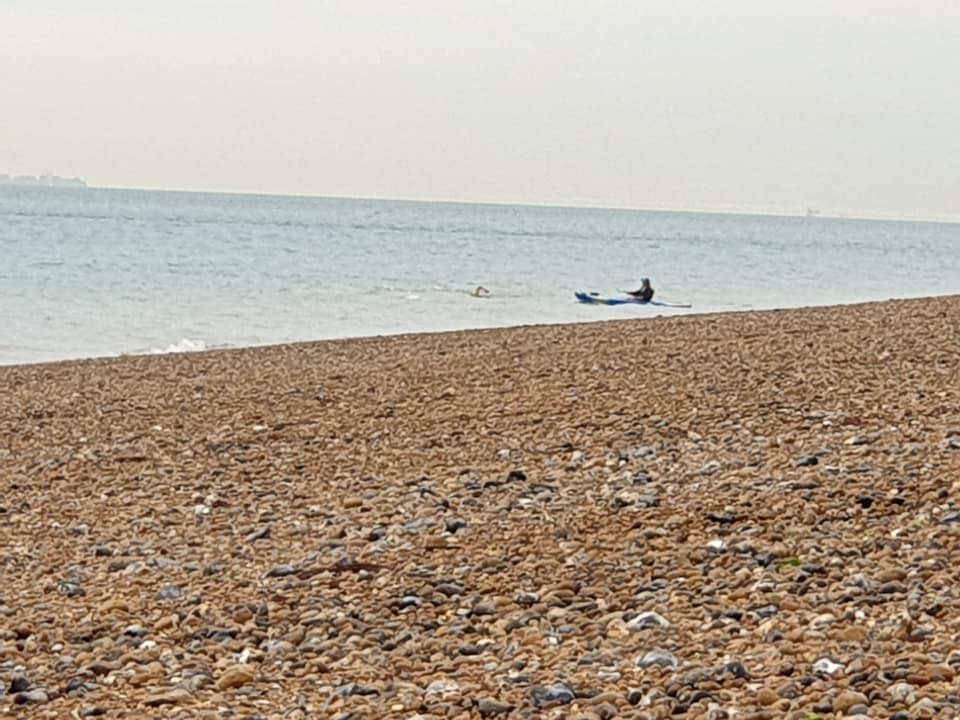 Third day was another three hour swim. Two days ago I was a bit nervous RE three hours in the sea as I hadn’t done it so far this year but with yesterdays swim in the bank, no problem, lets go! Temperature did feel warm and I was a bit concerned at one point it may be too warm for the qualifier the next day but hey, head down keep swimming! The distance was a lot ore reputable than the day before on the treadmill but I’m not looking at that anymore remember!? 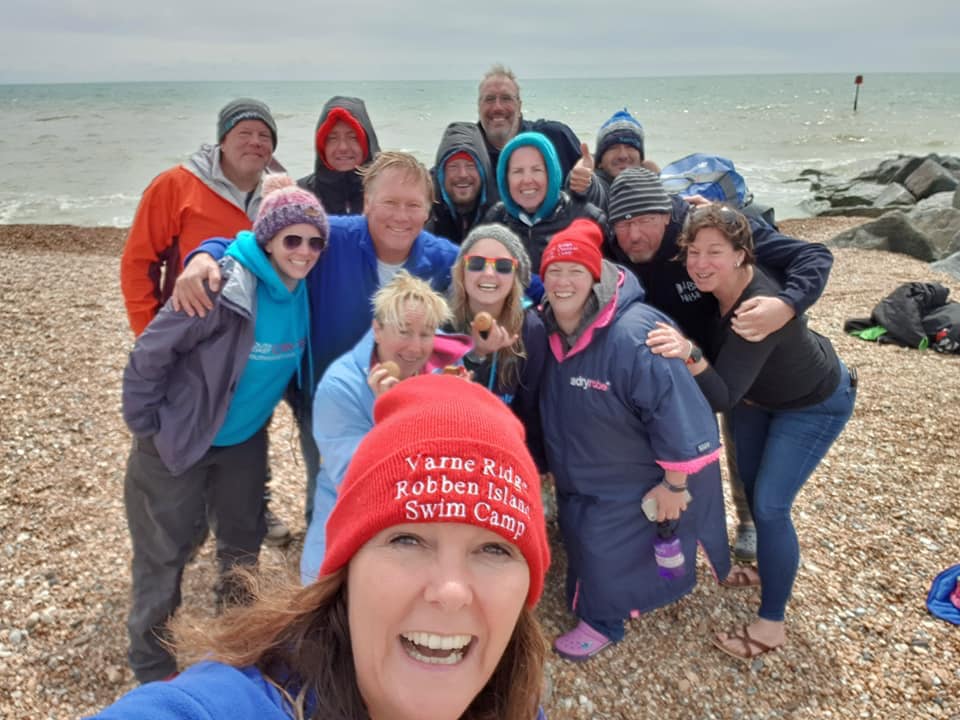 Each day the other guys on the camp also seemed to be building off the energy of the group and their self belief grew. Real mix of swimmers, some from hot climes, some not so good with the cold, some not have done much in the sea this year…but all with a connection to the channel in common! 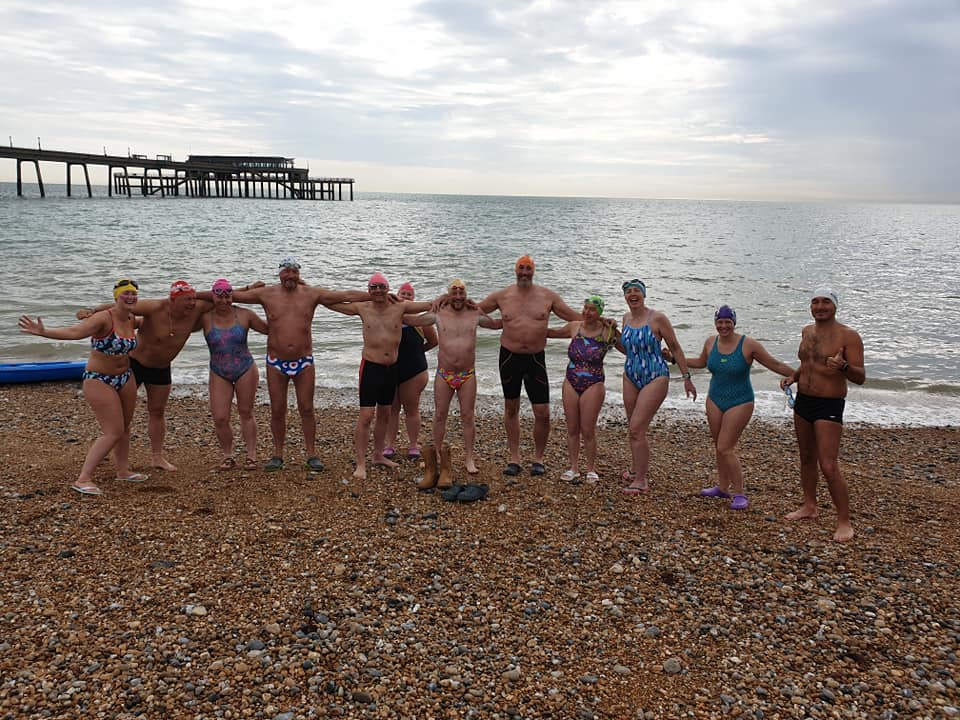 Wednesdays talk was all about Roger Finch and Tracy Clark and the swims they have done. Tracy I had met the year before where she was observing the Brutal Green channel relay; if you read the write up I really do credit her with saving our swim and the passion and energy she had on that day really led me to the Varne Ridge camp. Her swim history is amazing and she has such a tough mindset; a lot of the discussion today was about getting your head in the right place and turning any negative into a positive. Very inspirational lady!

Roger I didn’t know too much about ahead of time but his talk was very much from the heart and again a very impressive swim history! The guy comes across as a really friendly, warm, bubbly personality…but I think that hides a massive strength and determination and mental toughness just like Tracy. One of his swims was across False Bay in SA where on the tag trackers he knew there were 250 great whites (and that was just the ones with tags) in the bay! Top guy and at the risk of repeating myself, another hugely inspirational swimmer.

Early to bed, qualifier tomorrow. Weather forecast shows sun but a bit of wind so it was to be in the harbour at Dover off swimmers beach. Bit boring maybe but a huge history for us to live up to! 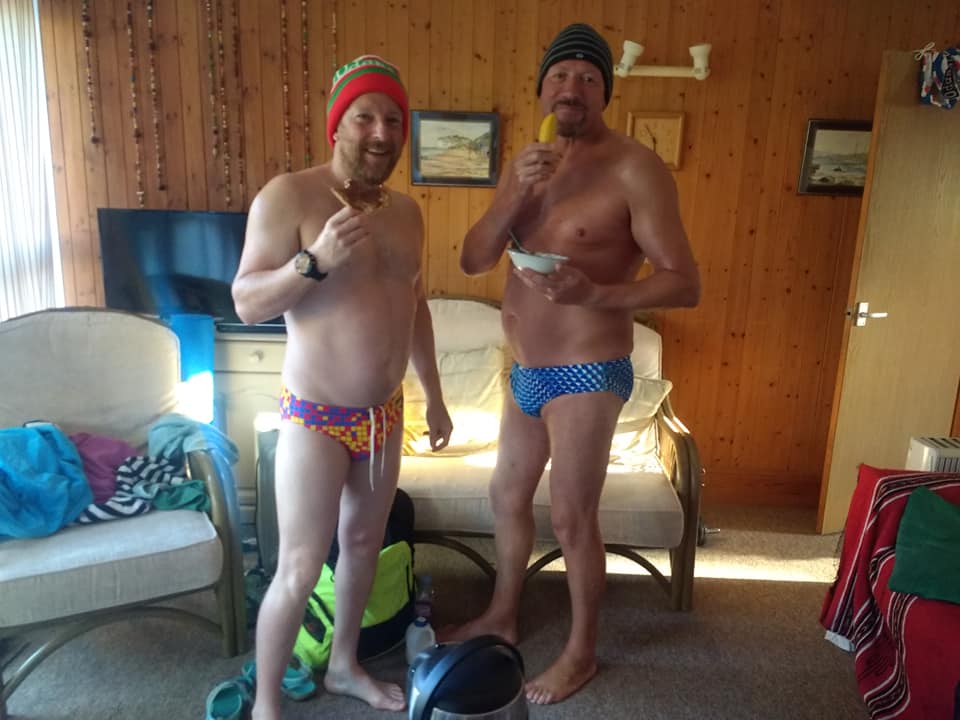 Driving down for a 7am water start, need to repeat again here I had a bit of apprehension and pressure on this swim. Id left it til the camp but now had 8 weeks til my solo so it almost had to go well. With Tracy and Rogers words ringing in my ears, we dived in and began to swim. The water felt crisp but not cold, watch said 14.0.  Each lap of the harbour is approx. 2km so I swam round my first lap for a feed…and got sent out by Tracy for another lap, apparently I was too fast! Normally, Id have my plan and not let it bother me so much but perhaps Id get a little annoyed at changing things; attempting to practise what we had been taught, I just swam off and did another lap without giving it a second though. Down by the wall towards the water really started chopping up and there was a freezing patch! Again, nothing I could do about it so head down and swim hard through it. I later found out there is a freshwater outlet into the harbour, hence the chilly spot! 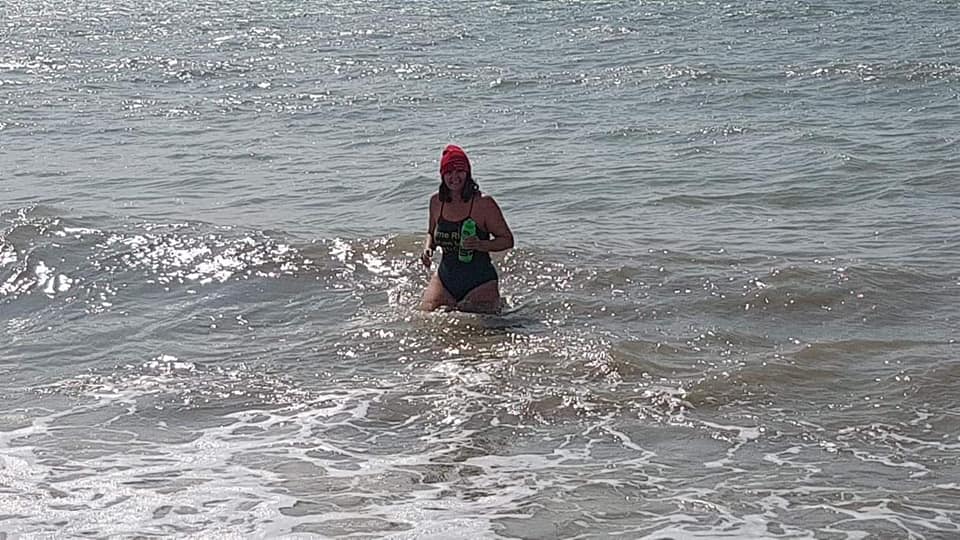 Each lap from there I came in for a feed and got a big boost of positivity from Tracy with the feed bottles and roger shouting instructions from the beach. Laps were ticking off and the time flying by. temperature was not ever an issue but by 4 hours it was up to 14.8 on my watch (again I need to get rid of this for the big swim as I’m constantly analyzing and comparing with what I know I can do). 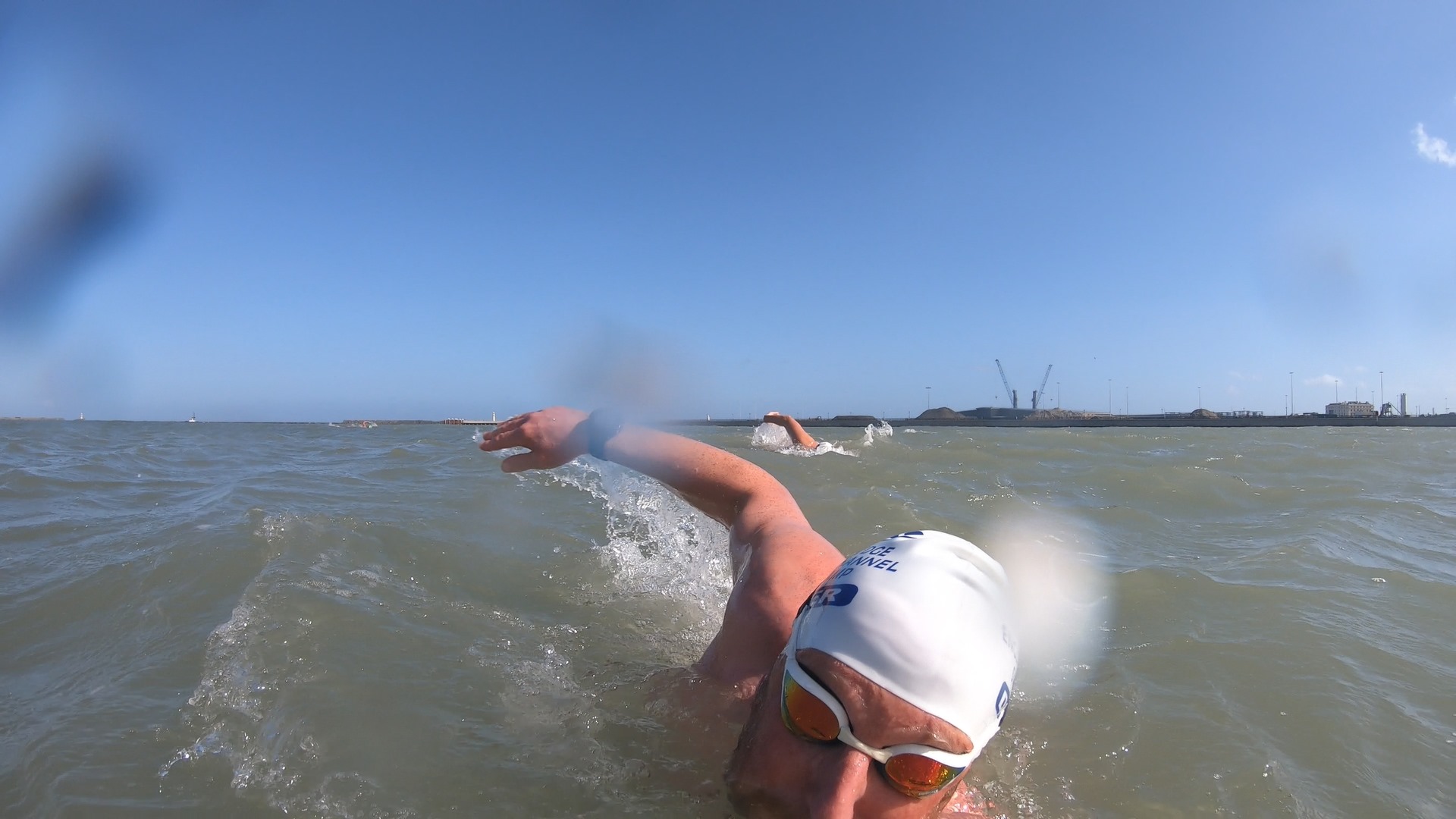 On the fifth feed Tracy said I was a little less chipper; my arms ere quite tired with 9 hours on them before today…but I was still pretty positive as I knew that one more lap, plus a little bit and I would be in. Like Guildford, I knew it was in the bag.

At this point the wind had built and it was really quite choppy! As I swam down towards the wall I stopped swimming to take a look at the chop and had just made the decision to cut the corner and miss the worst of it when Roger popped up on a kayak, huge beaming smile and clapping his hands at me! HE told me shelly and a few others were just over there through the chop; this made me really happy as Shelly had started the week with a longest swim of an hour in the sea, she had done amazingly well to build the time as she did and to know she was going to finish the six was a big boost! I admitted I was about to cut the corner, he just pointed to the wall and told me to swim. No questions, no discussion, I just did it. Id built a he respect for the guy during the week and if he said I needed to do it, I needed to do it! It was a long slog back up and I didn’t even se him again to tell him I’d made it! There was a few minutes left for the 6hours when I got back so I did another third of a lap, mainly just messing around rather than swimming. When I got back to the beach there were an awful lot of swimmers milling around in t he water congratulating each other, ten from the camp had started with the intention of six hours, ten had completed!

The last evening was a certificate presentation and dinner in the channel swimmers pub les fleurs, great evening with some really good friends. Everyone was tired but everyone was really really happy!