In theory, the relay window was pretty good. We were the only ones on the tide so it could be a case of just waiting for the best day. In practise, the forecast had low pressure systems in charge all week which means unsettled weather, and not enough gaps inbetween to get the swim completed. Stuart the pilot of Sea Leopard kept calling every 12 hours saying the forecast had updated and the changed again and his advice would be to hold off. In the end it looked like Tuesday and Wednesday were going to be OK with rougher weather coming in at the end of the week. Tuesday looked like a windy/rough start but settling down to a perfect finish and Wednesday looked like smoother water but worse weather all day. We decided to meet at the boat at 3am on Tuesday and go and see how rough, rough was… 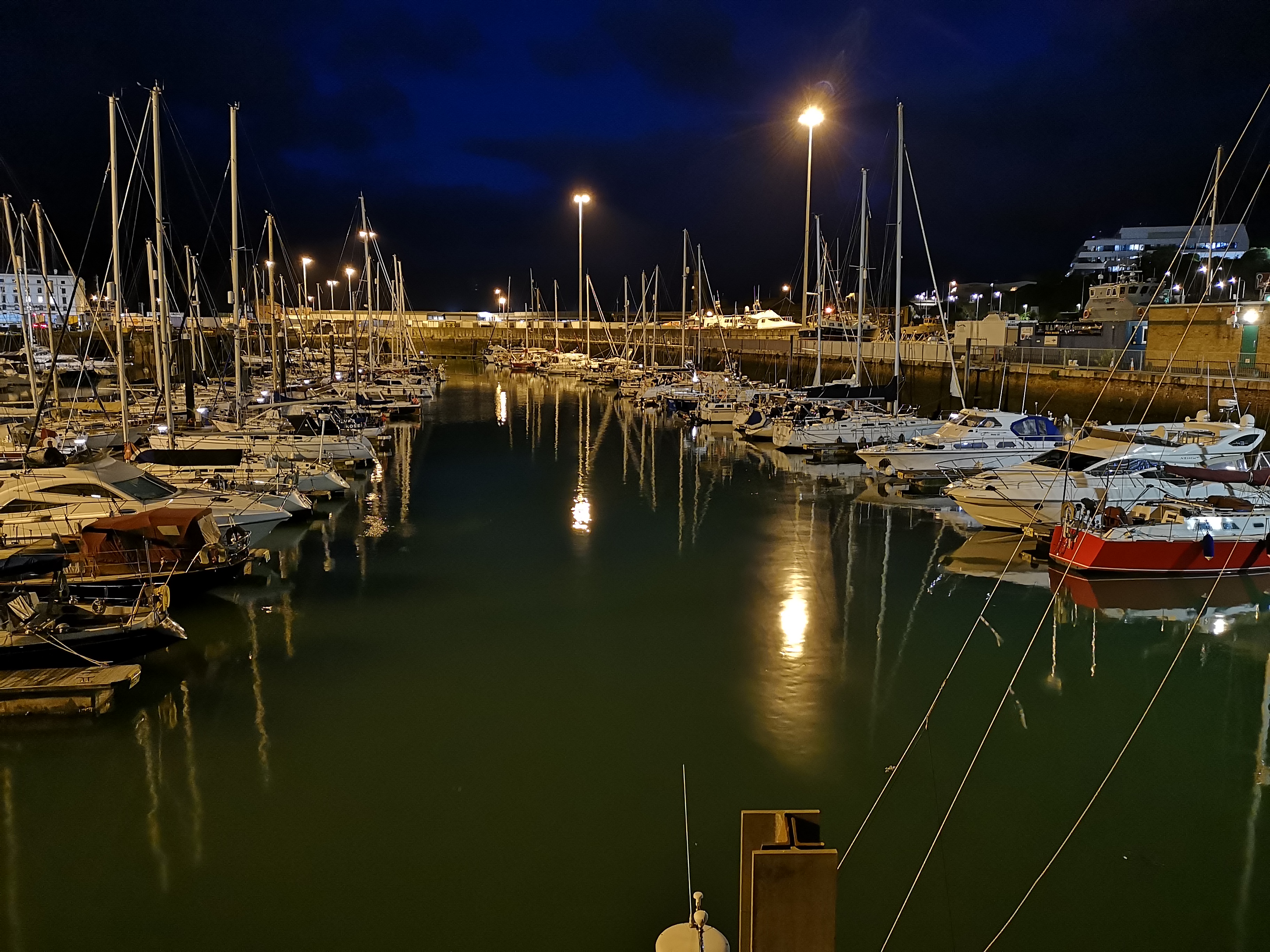 Dover looked reasonably calm at 3am as we moved a small mountain of stuff onto the boat. Stuart had decided to motor round to the start to take a look before making the final call…but we were moving and there was a huge sense of excitement! There didn’t seem to be any real discussion of shall we turn round when we got to Samphire Hoe; it was on and we all knew it! Water was choppy…but with last weeks PMA training in the back of my mind, I knew that I could easily push through rough stuff for an hour and after that, it would depend if the channel gods were with us or not! 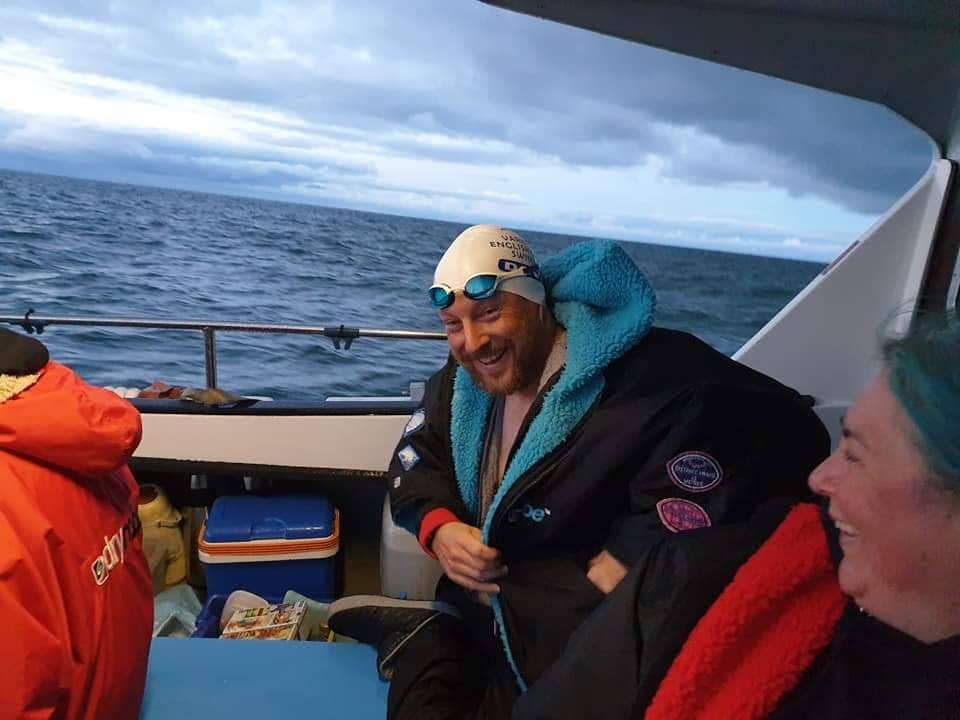 I greased up, jumped in and swam to the beach. Rules dictate you need to clear the water so I waded up the pebbly beach and raised my arm to signal I was ready. At around 4am to a blast from Sea Leopards horn, I hobbled back down the beach and splashed through the breakers, swimming back out to the boat and pushing out through the breaking dawn, we were off! Sea leopard is quite a small boat reasonably close to the water but in the semi light and the chop, it was quite difficult to pick a spot next to the boat and hold a straight course, the waves and the splash bouncing off the hull seemed to swamp my breathing every breath; all I could do was try and hold a nice stroke and make as much progress as I could whilst avoiding swallowing too much water! Almost as soon as it had started, it was over and I was being signalled my first shift was over, I slowed up and swapped with Andrew, climbing out and having a little bit of a shiver! Water had been 14.5 ish; fresh, but not too bad. 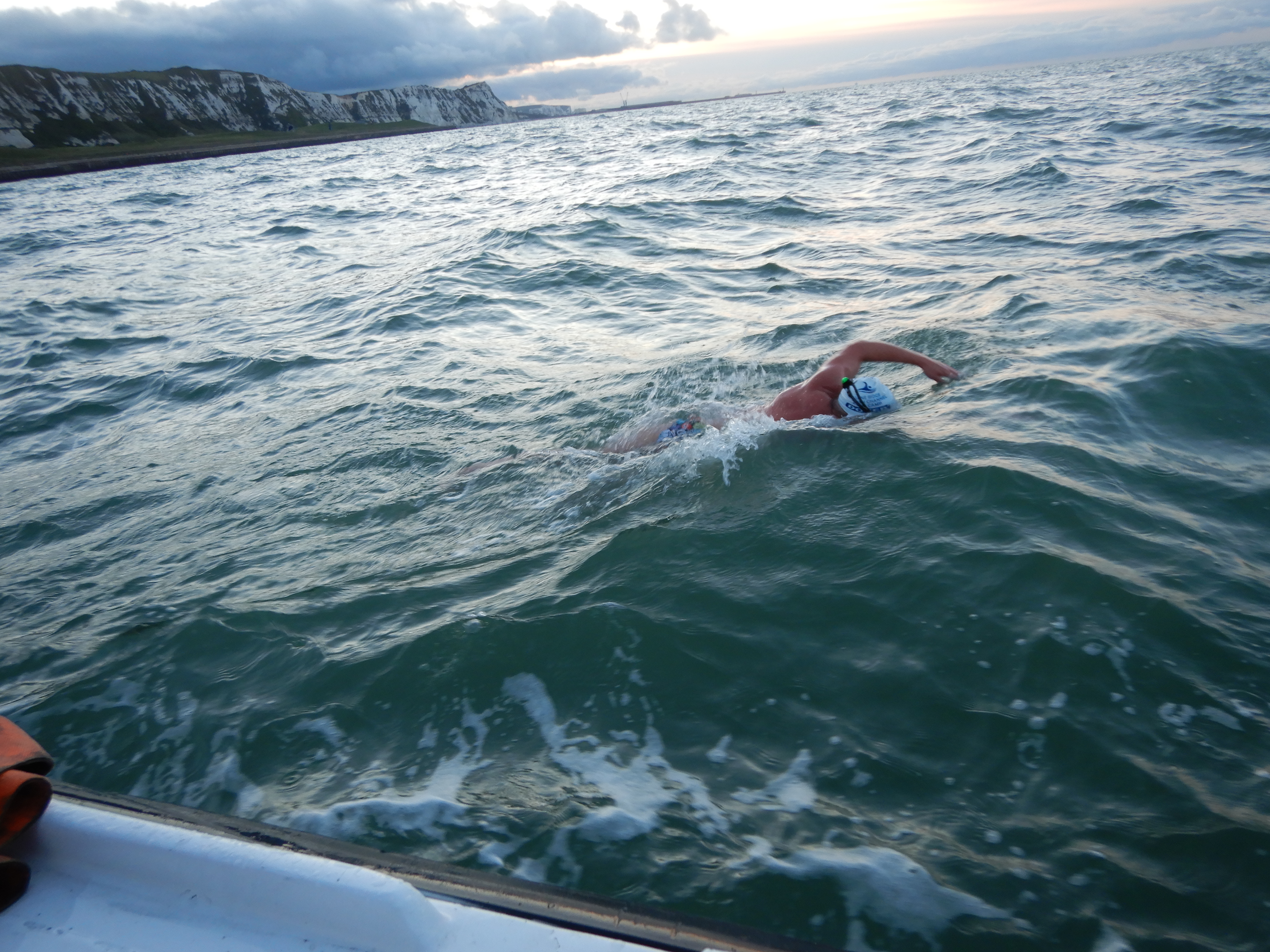 Andrew swam strongly through his hour, again pushing through the chop and doing his best to make us some progress. Everyone on the boat seemed to be holding onto their breakfast as the boat bounced around so that was a small positive! The sun was also starting to peak out, fingers crossed for a lovely day! 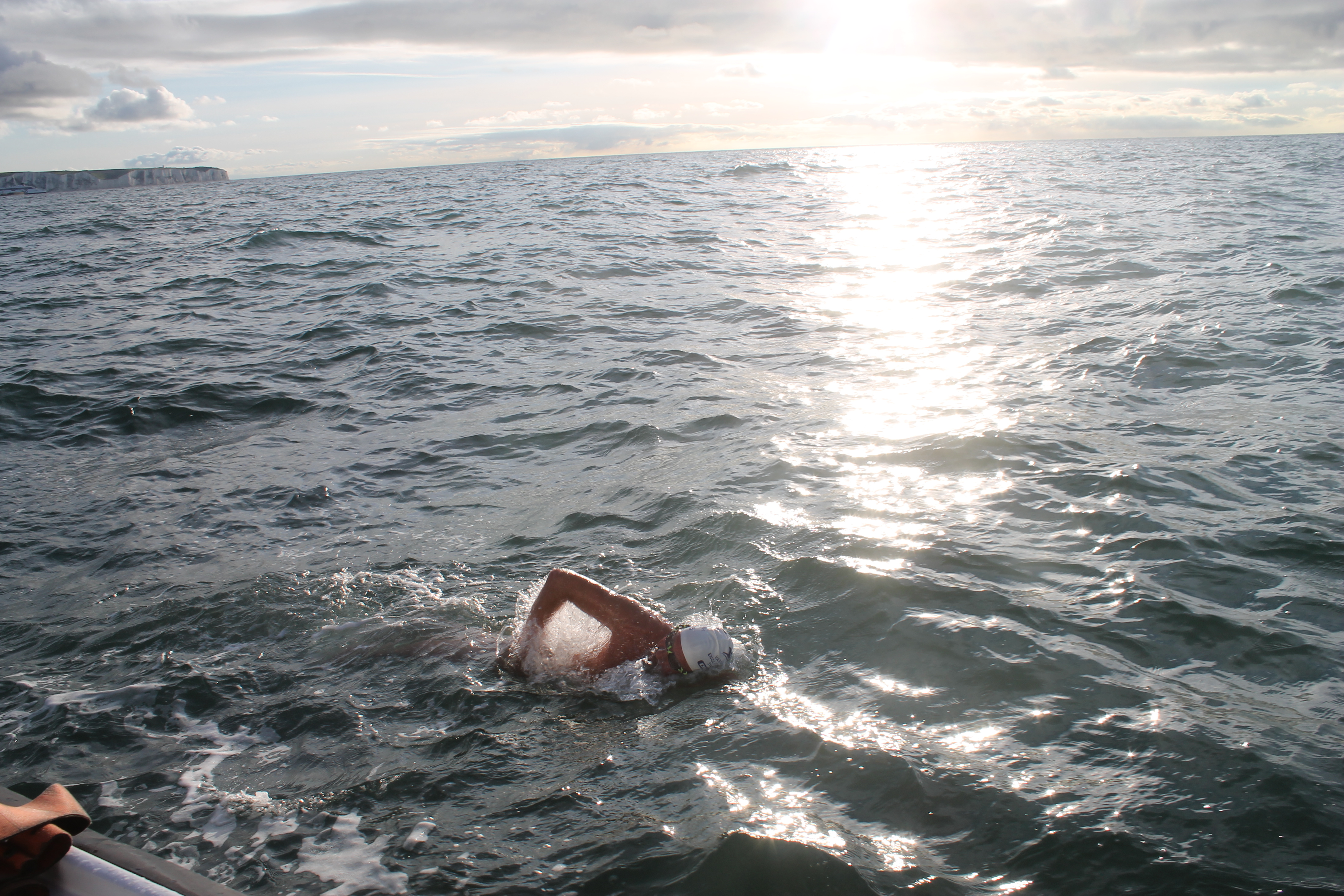 Sallie jumped in on two hours and swam a brave hour battling the chop. She was getting hit around quite a bit and took on some water; after her changeout it was apparant she had drunk too much and lost her breakfast over the side. Really important at this stage to try and not let this take over. We are all swimming a long way so the last thing you need is not to be able to take on any fuel or drink…and she did a valiant job of holding down what she could! Hour four was Lisa, swimming breaststroke. I think the fact she was swimming breastroke, and the chop (she was used to lakes) meant she looked quite nervous getting in. We had discussed beforehand that everyone just needed to get in and finish their hour and whatever progress you could make would help. She swam her hour without a complaint and when I jumped back in, we were on the edge of the first shipping lane. 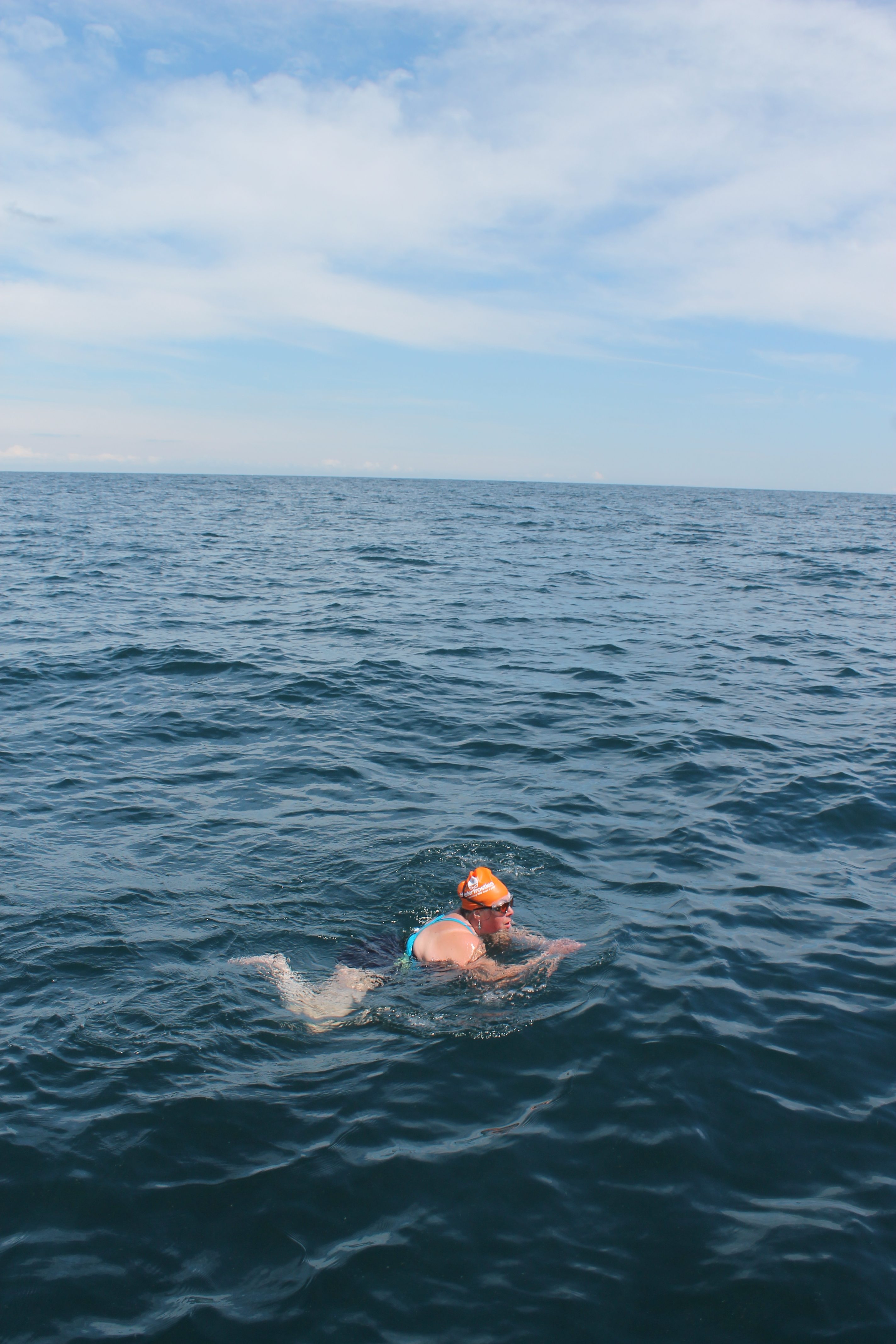 As I was about to get back in Stuart told me it had picked up a little bit again; pretty annoying if im honest as it was supposed to be flattening out but probably best for the team the stronger swimmers get the rougher sea! I think the second hour was worse than the first but I wanted to push as deep into the shipping lane as we could to put the team in the best place; again the hour seemed to go really quickly but the temperature had noticeably dropped and I had a real good shiver afterwards, coldest water temp was 13.2! 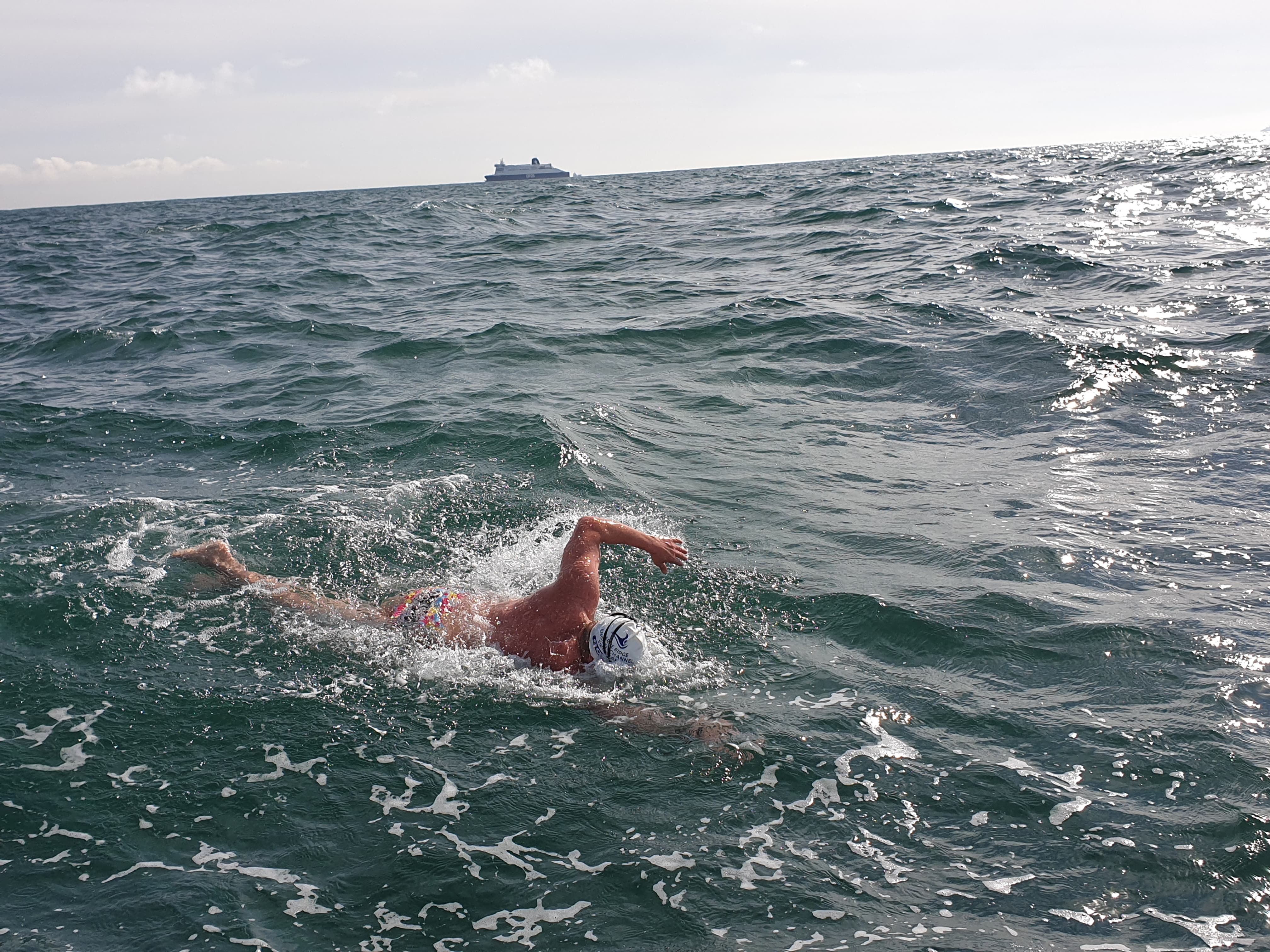 The water was starting to flatten out now, Andrew swam a steady hour and climbed out with a huge smile on his face! Looking back at the cliffs of Dover, a second boat was chasing us down. A soloist had gone out on the boat Anastasia. Starting an hour behind us she was putting in a huge effort and reeling us in. As Sallie and the Lisa swum their second hours, Anastasia caught and passed us. Lisa’s second hour started on the edge of the separation zone; a one mile wide gap between the shipping lanes. Usually this is where all the flotsam collects and when I swam it last year, was jellyfish soup! This year the rough weather had broken everything up and it was too cold for Jellies so plain sailing towards the French shipping lane! 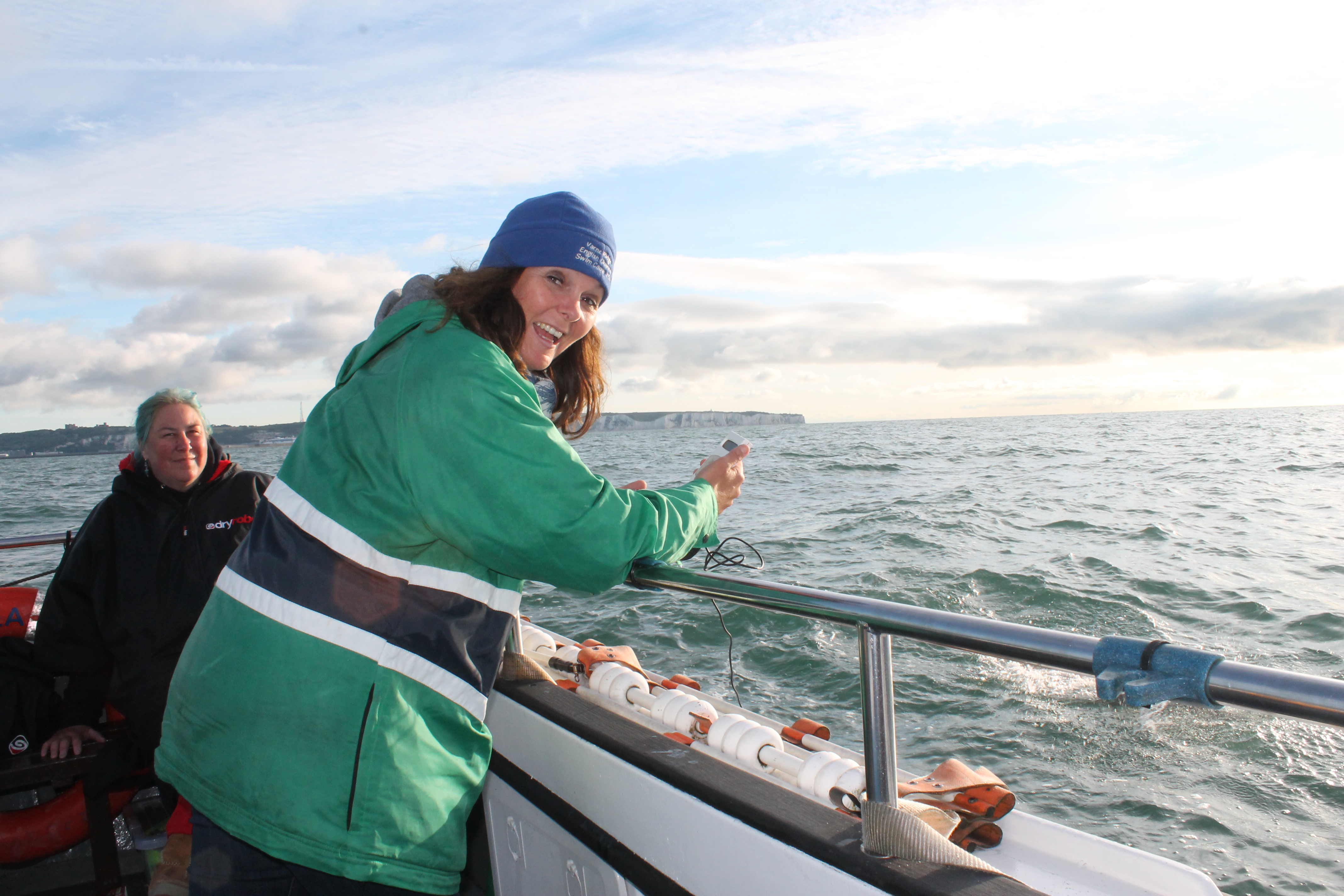 My third hour, the water had calmed down quite noticeably so I eased my stroke rate back and tried to relax into my all day pace. As much fun as battling the swell is, its hard and tiring and not what I should be doing on my solo! My third shift took us into the French shipping lane. 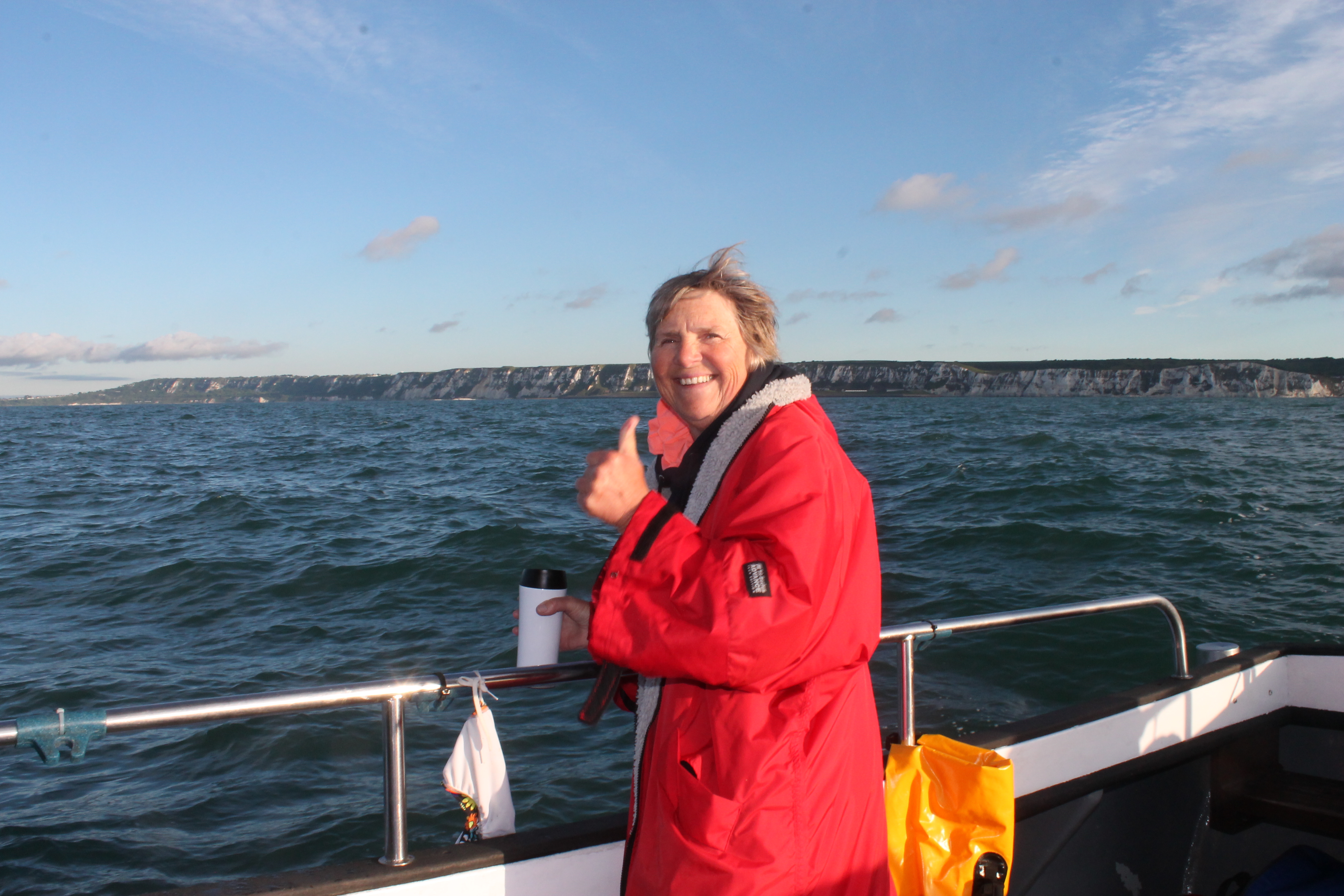 Andrew and Sallie both seemed to swim at a similar speed and their third hours just made solid steady progress southward. The weather was now pretty good with the sun out and the water calming down. The air was still cool and we were all wrapped up well but we couldn’t really have asked for more! The tide had also now turned and our run eastward into the ferry lanes was now over and we were beginning to run to the west, down the French shipping lane to the three mile marker which indicates the edge of the shipping lane and is exactly three miles off the cap. Lisa took us past the bouy just to the west; the tide runs incredibly strongly here and this is where people say the swim really starts! 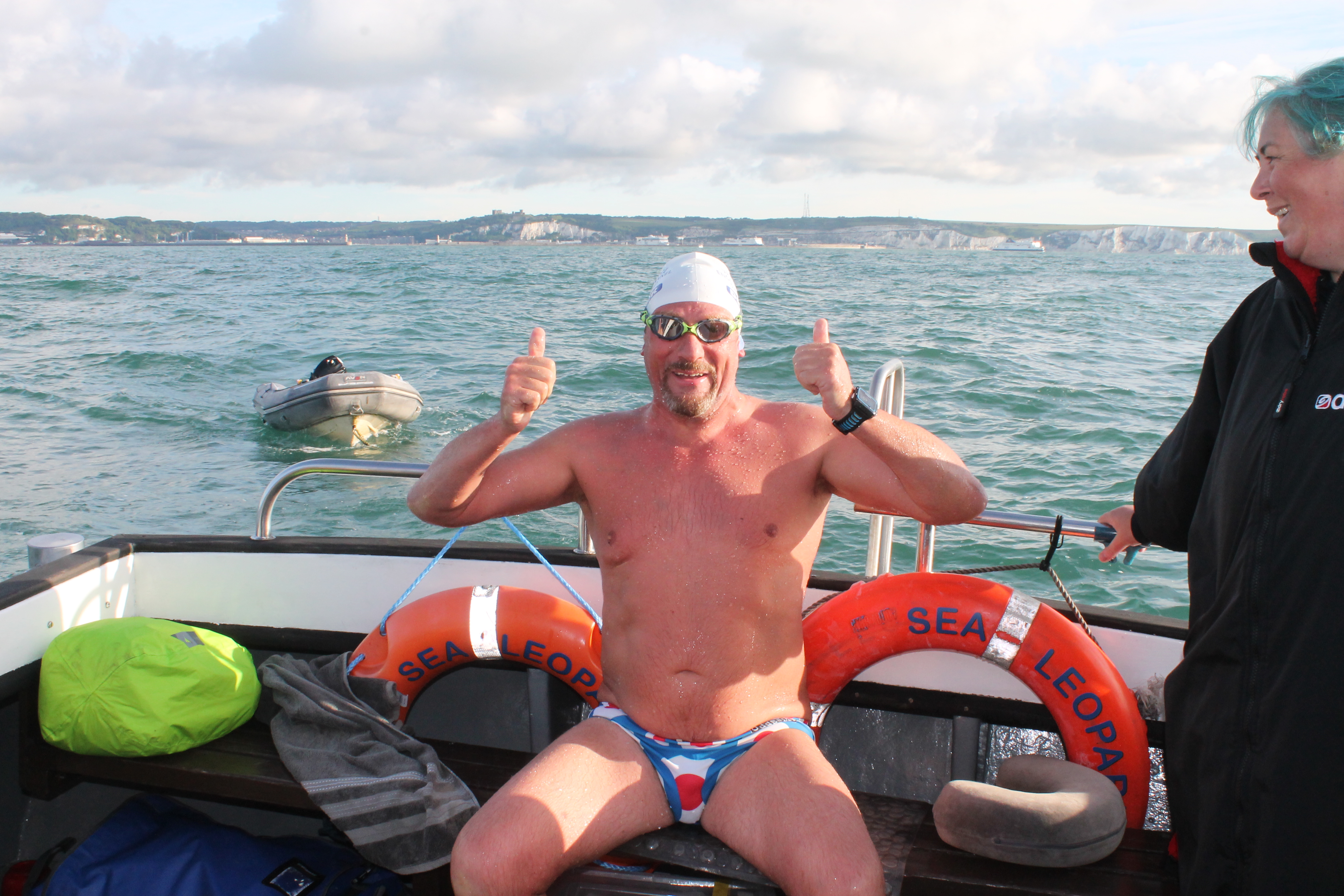 Hour four was just head down, push hard, try and make as much forward progress as we could. The tide had pushed us to the southwest of the cap and the lighthouse and we were just waiting for it to turn to sweep us back round north eastward. Stuart said it was slack when I jumped in but I was getting pushed a long way from the boat so I don’t think it had! The water was nice and flat though and starting to warm up nicely into the 15’s. 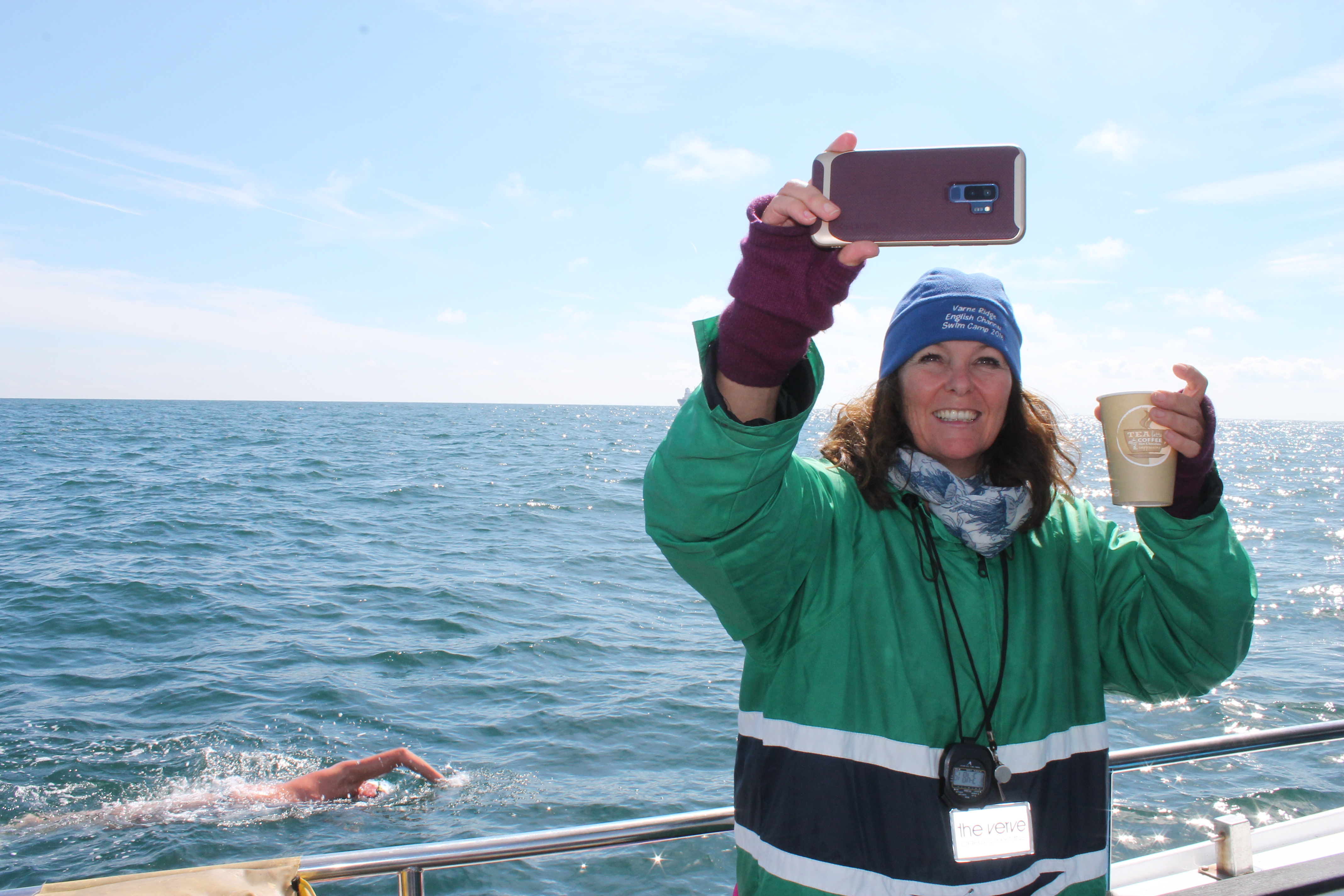 Anastasia had been there or there abouts since she caught us a few hours before…but now we seemed to be reeling here in a rate of knots. The soloist had put a heroic swim in considering the rough start and the temperature. In the distance as Andrew swam we could see two hats in the water which meant she had a support swimmer in helping to push the pace. As we got closer we saw the support swimmer climb the ladder…and then a second swimmer climb out. It was over for her, she was done. We were all really really gutted for her as it was a phenomenal effort to get to where she did, and really brings home how hard a solo swim is. 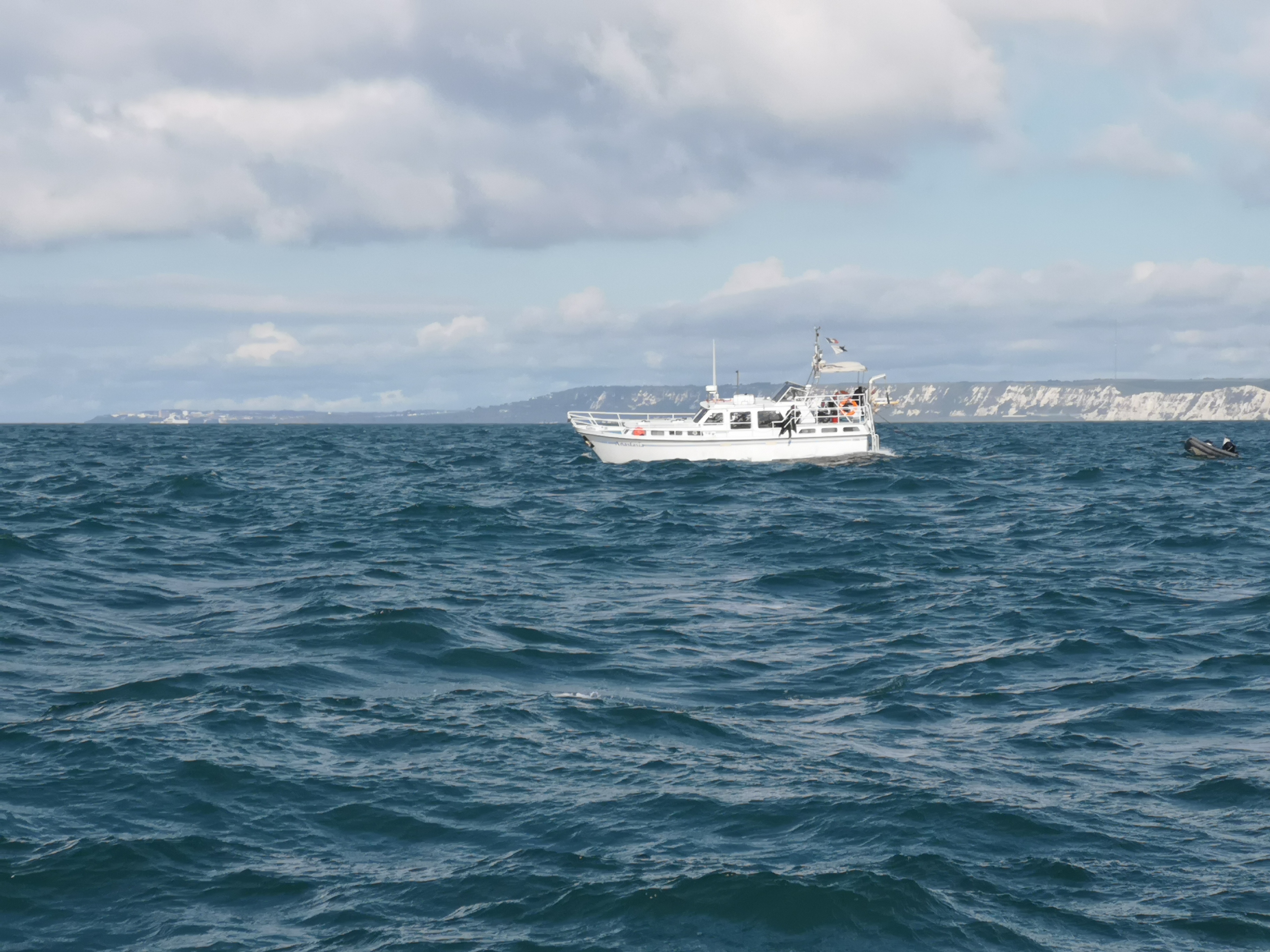 Sallies fourth hour was a really strong swim;  the current was pushing us North past the cliffs at Cap blanc nez, Sallie managed to push us though it and change our track so we were now drifting in to the bay of Wissant; as long as we could carry on now we would be home! 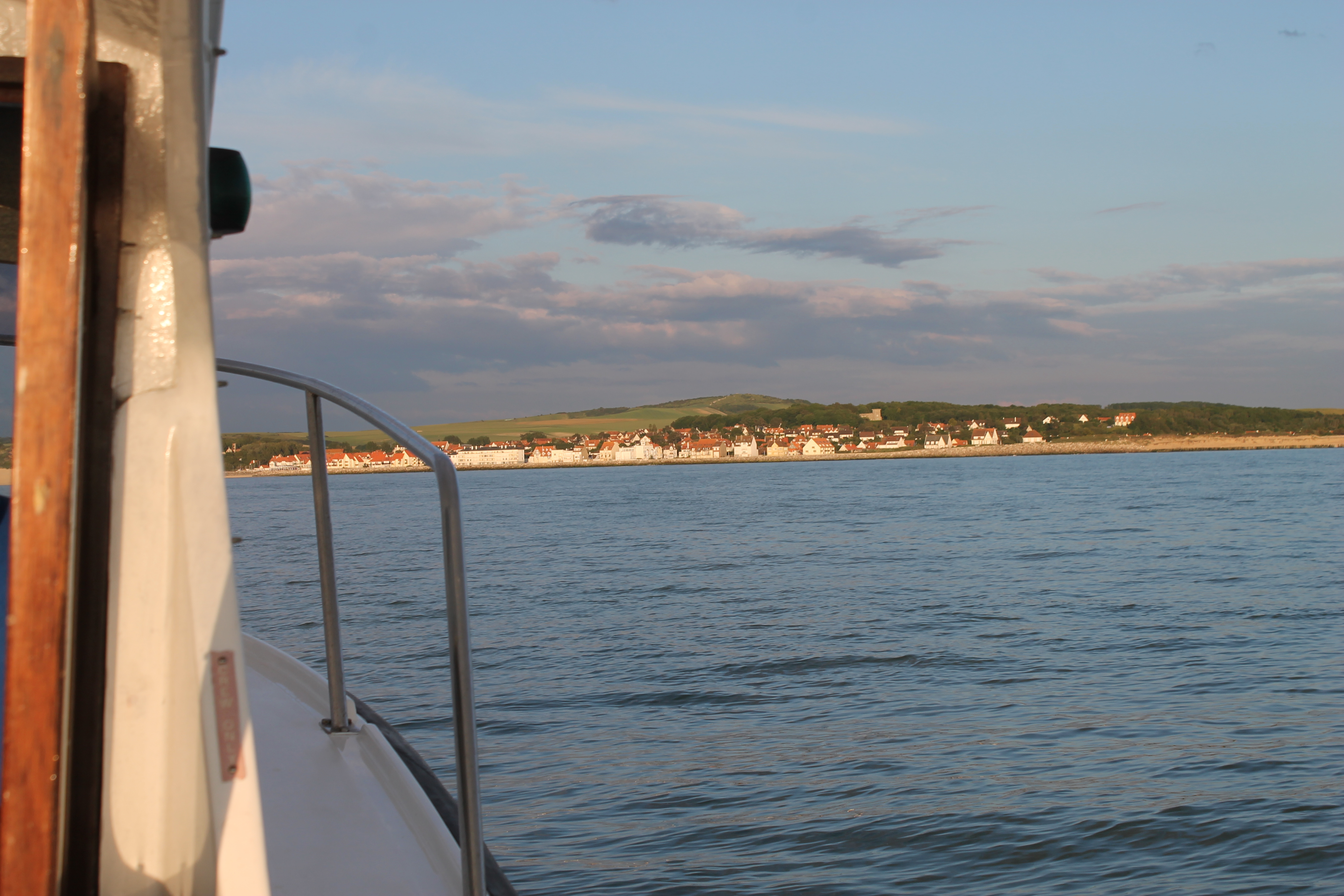 Lisa had one mile to swim on her hour, the water was now flat calm and the sun a beautiful orange glow; this was going to be an awesome finish! She was cold sitting on the boat so we did our best to get her warmed back up with a hot water bottle and warm drinks and credit to her, she jumped back in and swam without a complaint. We were almost close enough to tough the beach but unfortunately for Lisa, it was just too far away….but that did mean I got to jump in and finish the swim off! 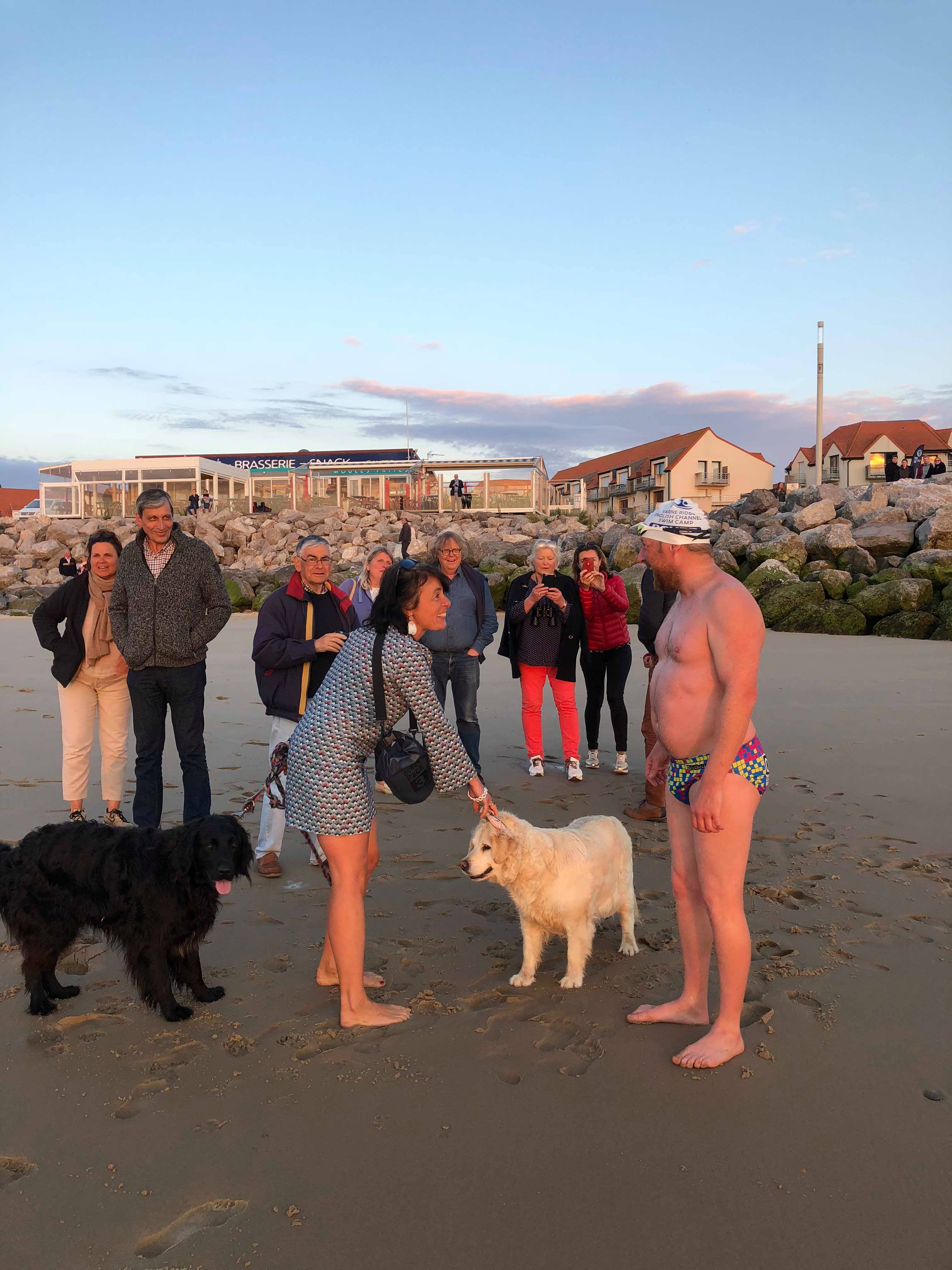 As I jumped in I started ploughing off towards the beach. Stuart was launching the dingy to follow me in so for a minute or two I was on my own, France in front of me but nothing to the sides. All the hurt in my muscles had gone and I was full steam ahead! The tender soon caught me up and Sea Leopard then powered past to take up a grandstand spectating spot. I thought I was a lot closer than I was; just didn’t seem to be getting any closer! As I sighted I could see some people on the beach and before too long, I felt the sand in my fingers. We were home! I ran out the water and threw my hands up! Not sure if sea Leopard sounded her horn but she was too far out for me to hear and the tender didn’t want to come in through the breaking waves so I didn’t know if they had seen me ashore or not! 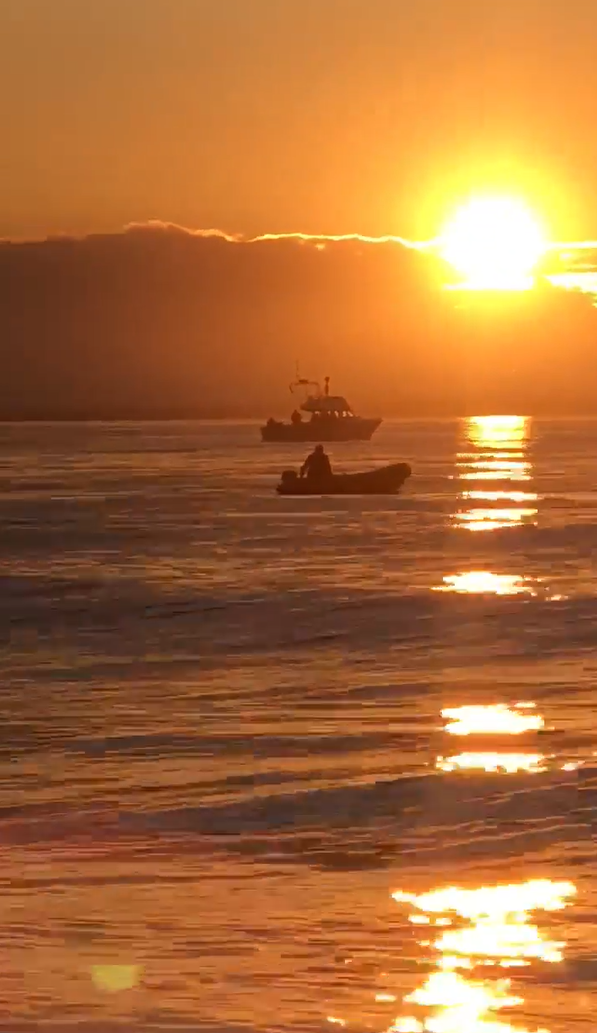 I’d thought about the landing for my solo several times but this really did seem like a practise run! On the beach were about ten people including a couple from the facebook group dover channel training; they had been tracking us all day and had come down to welcome us in and take pictures. It was a fab fab end to a really great day! Only thing left was to gather some pebbles, say goodbye to my new friends and swim back out to the tender to start the journey home! I made a quick video of the day with all our clips and the clips from the finish!