ITs been a while since the last update, apologies, been ticking over but not much more…apart from one lucky Friday in September!

The swimtastic WhatsApp group is filled with like minded, maybe slightly crazy outdoor swimmer types, several of whom have some serious swims under their belts! One of the group mentioned he had been planning a Swansea bay swim and possibly had space for anyone else that wanted to come…and just like that, it was on! I kinda felt a little bad that Liam had spent a long time organising and training and at the 11th hour Id just tagged on but hey, it looked like a fab swim and I didn’t want to miss it!

Liam had done a fab job of organising and had arranged for the Maritime Volunteer service in Swansea to pilot us the 8 or so miles across with two Ribs for not much more than petrol money. Bargain! The weather that week was looking a bit crappy but as Friday the 13th approached, the weather broke and it looked perfect; it was on! 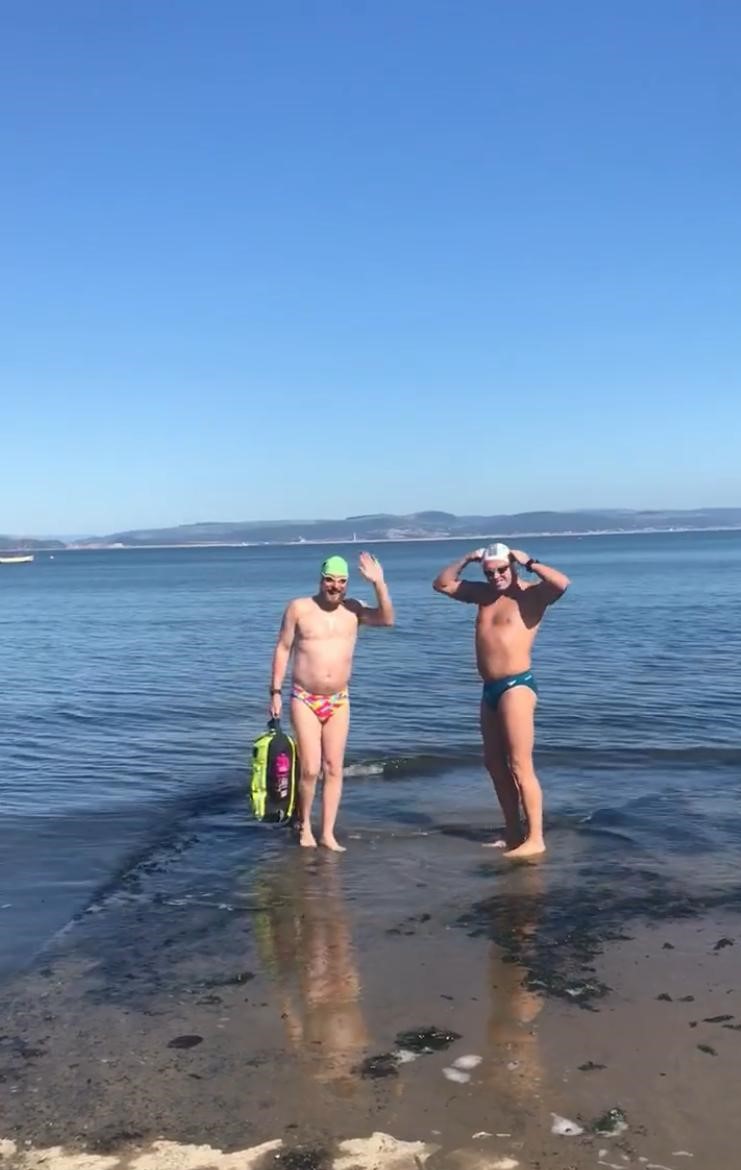 Slight mess up with the logistics meant I was stood at the start with my clothes I needed at the end in a dry bag so we both left the beach at mumbles head and I gently patted my bag out in front of me out to the boat. From there we were off! Liam was a bit faster than me but we had both said not to go off too hard; pace felt fast but ok and we maintained neck and neck with one boat way out in front and the other behind; not ideal for sighting! Although the water wasn’t quite as warm as it had been, it was smooth and conditions were great with bright sunshine!

An hour or so in we stopped for our first feed and were thrown our bottles from the Rib. After the feed Liam started to creep ahead, a little at first and we probably maintained a 50m gap for the next couple of feeds. I was starting to struggle with sighting now tho as he was too far in front for me to see, the little rib was probably a hundred metres in front of him so I couldn’t see that either in the swell and the other boat was sat behind me so I couldn’t see him at all! 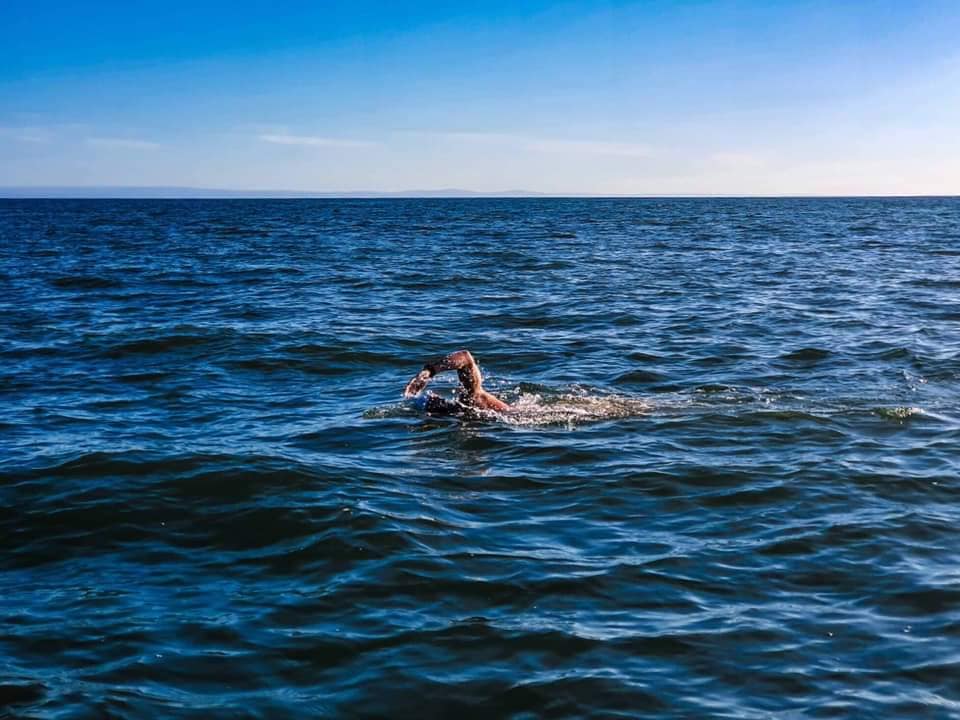 Near the middle we had to go across the shopping lane into Swansea harbour. I thought this was mostly small boats but all of a sudden the rear boat shot alongside me to mark my position as quite a big freighter came past quite close!

I carried on swimming but was really starting to struggle to see the way, I really couldn’t see the boat in front and as the bay drops away, I was a bit too far out to sight off the land at this point either! I kept stopping to swim head up to try and see them in the distance but in the end started veering off one way or the other. The rear boat kept popping up alongside and pointing me in the right direction but then they kept dropping back out of sight. It was clear they hadn’t really piloted swimmers before but I was super grateful for them giving up their Friday afternoon to help.

On the next feed I explained to them my problem and asked them to stay alongside so I could see them when I breathed. The next hour went great; we were into a rhythm! Eventually the “bright lights” of Port Talbot started looming. A huge offshore drill ship was moored in the harbour near where we were going to land so it was obvious from quite a long way out where we were heading. One of the big rules of channel swimming is not to look at where you are going. That never works and the problem with that is it looks like its just there….and that drill ship is bloody massive! It took an absolute age for it to even start looking a bit bigger, the last few miles seemed to take forever.

I was fairly confident I pretty much couldnt have been moving at all for the last half mile or so but the guys on the boat seemed happy we were getting there, the chop was starting to build and the temperature, MAN, the temperature was dropping really badly!! There is a river that pops out in the inner harbour so we must be close but boy was it chilly!

Finally the breakwater appeared and I could see from the wall we were actually making progress. The water was also smoothing out to the perfect mirror with the shelter of the walls. 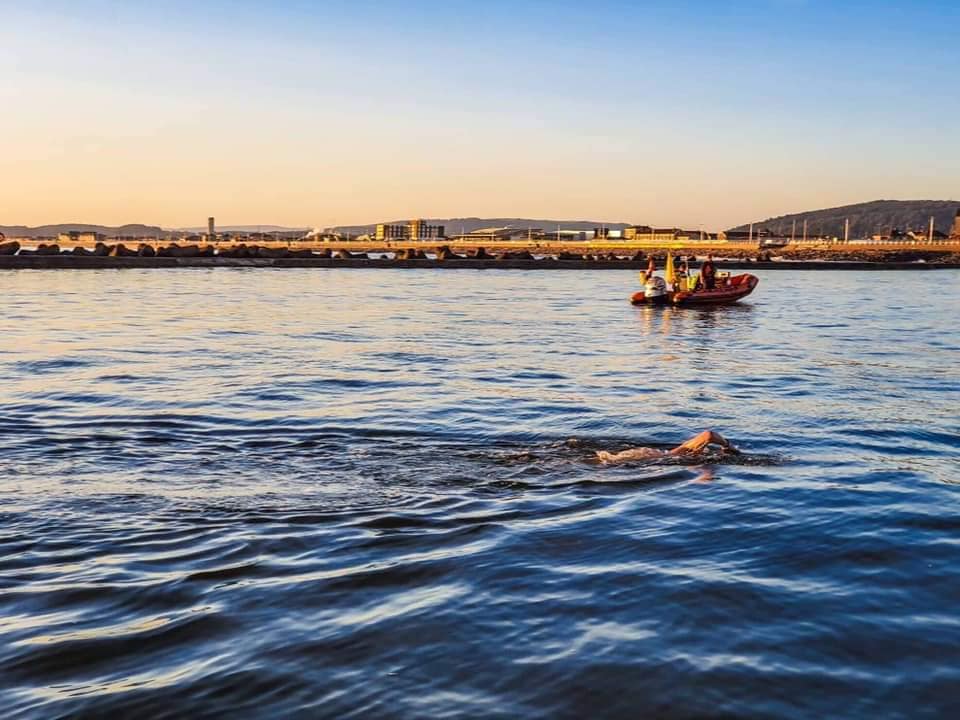 I left the rib behind and swam in to the beach to meet liam who had arrived about ten minutes ahead of me; he was wrapped up in a dry robe and shivering really badly! We’d done it tho! 8.5 miles in just over 4 hours. 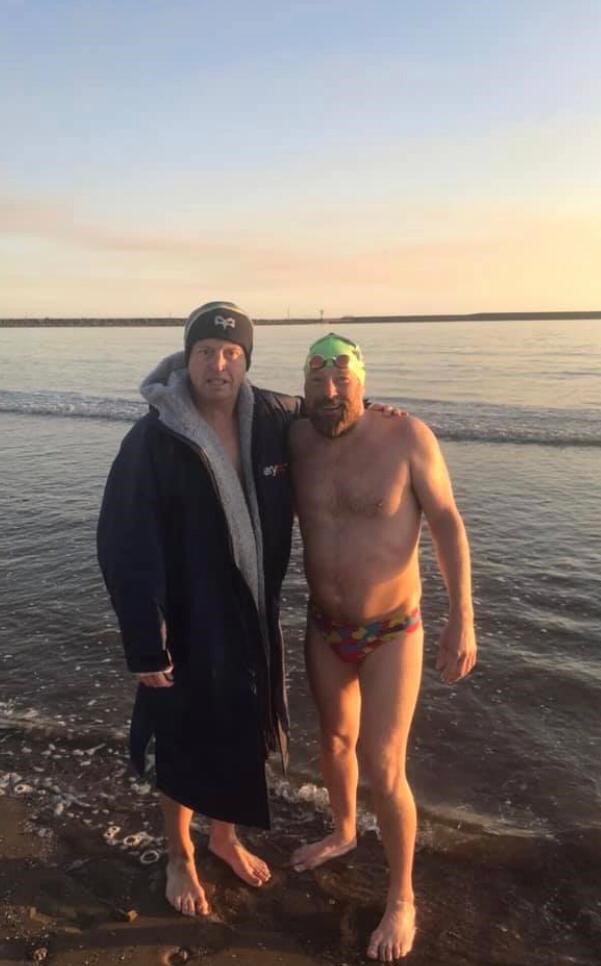 A couple of high fives and we parted company, Liam had met his wife on the beach and I was going back to the harbour on the boat so I swam back out to the boat, climbed out and we blasted at full speed back to Swansea.

Awesome day and so grateful to Liam and the MVS for organising!