After the relay I really wasn’t very well! Had a bad cough and chest and spent a few days in bed. Bleurgh. I’m never ill. Combination of tiredness and perhaps getting the lurgy off someone….and maybe too much channel water! The weekend after was due to be the humdinger 6 hour swim followed by another diy six for back to back sixes/split channel. Humdinger happened, but wasn’t great. My new hat and not enough lube ate the back of my neck so Sunday morning really was just a dip and I called it a day to fight again. Not Ideal. The date (1st week of August) is now looming large.

Chatting with the Varne Ridge Class of 2019; Ness who is swimming the channel the week after me had a similar back to back that didn’t go to plan. The weather was showing blazing sunshine this weekend so I thought Id head to Durley sea swims for the best chance at a good B2B. Ness checked the flights and found a cheap one from Ireland so decided to come too!

Durley is a group on the south coast near Bournmouth, a little bit like the dover group but a smaller group and a nicer setting. Compared to Wales (and Ireland) the water is warm and the beach support feeding you is amazing! Makes it quite easy to do a long swim as you can do a lap. come in for a warm feed and some smiley faces…and repeat! 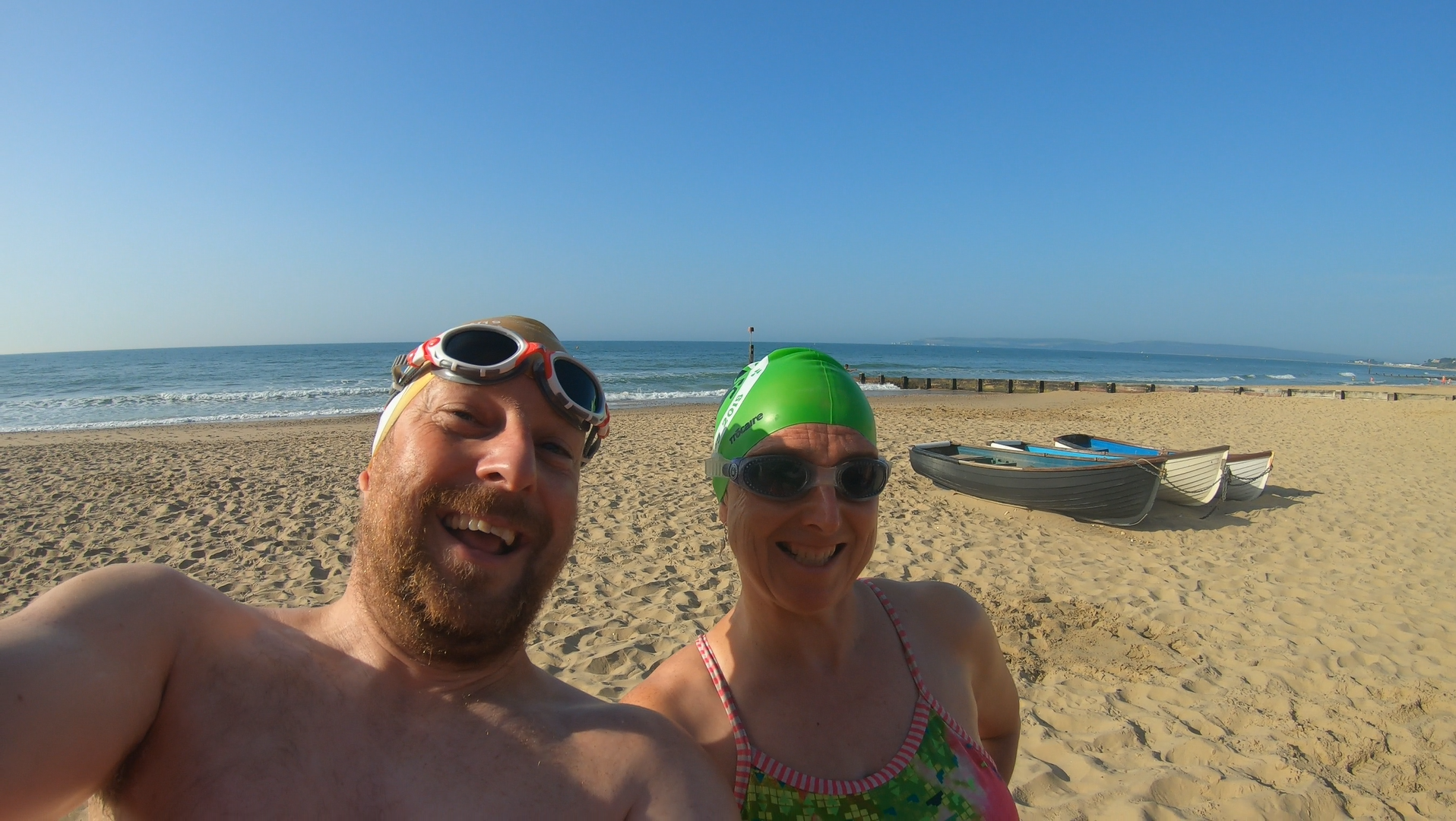 We rocked up on Saturday morning and were met with bright sunshine, flat water and a couple of others doing six hours…and one guy doing a seven. Immediately, competitive Ness points to the seven with a cheeky smile. Arse, this is going to be a seven! When we jumped in at 8, i couldnt believe how warm it was. Watch said 18+. It felt boiling! I swam straight out and with a big smile on my face (because it was so warm) swam right up and right back, timing my run back int the beach for an hour and a half. Not uch to say RE the rest of the swim, lots of 45 min laps back to my feed, lots of sunshine and lots of insanely warm water! Pretty sure my watch was reading high but it said nearly 20 near the end! Water was a little bit swelly at the start, which is great for swimming in, flat in the middle and a little bit of chop at the end. Ideal. At five hours I came in for a feed and was told Ness was doing seven. Normally that might have dipped my head but I was enjoying it so much (and id already accepted it was going to be a seven) onwards to seven! 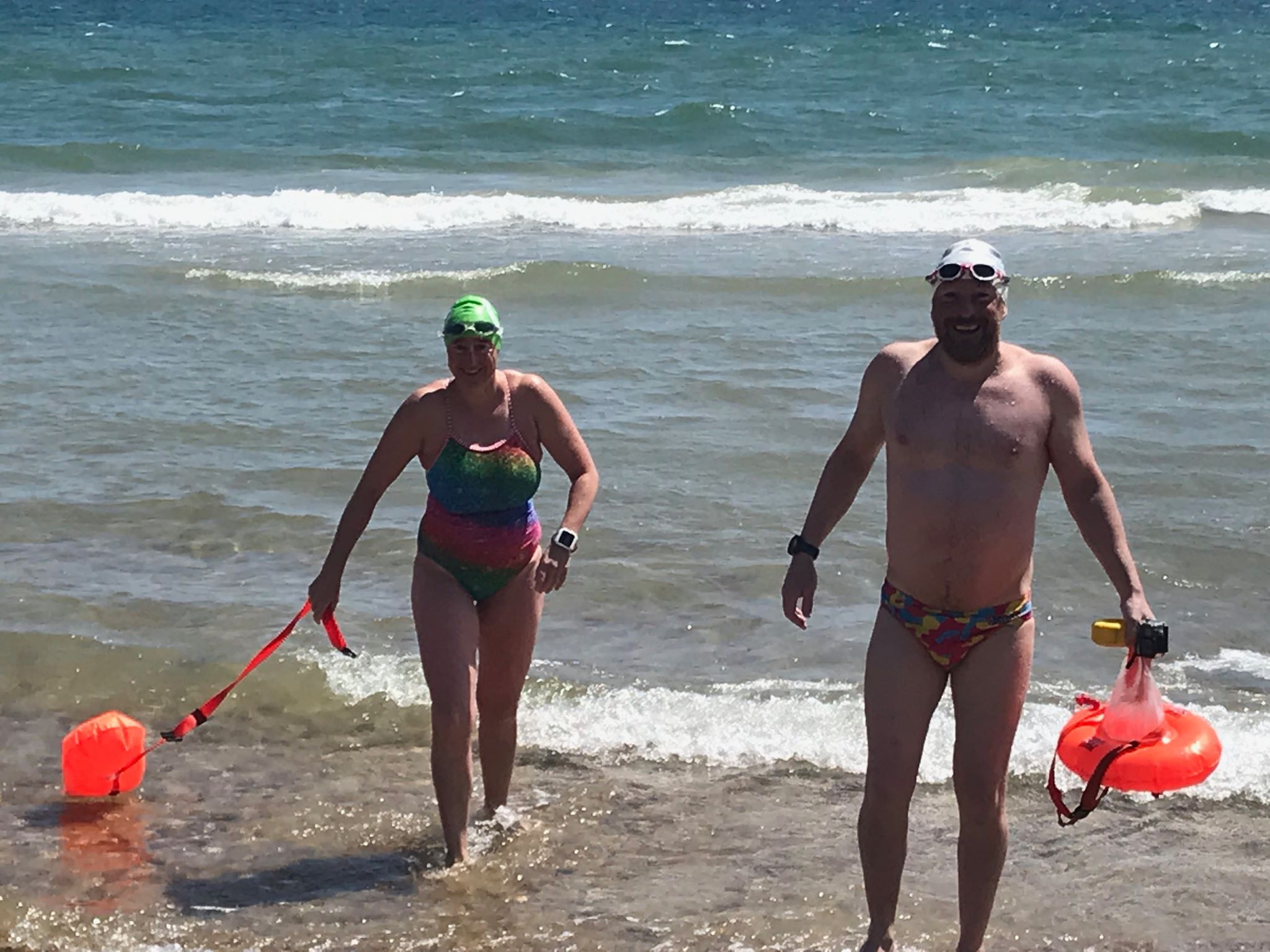 Seven hours is a significant swim…but I got out still smiling, it was just so warm, it was too easy! Dont get me wrong, Im not complaining…and that was the whole point of going to Durley…but it shouldn’t have been that easy! Tommorrow would be the day tho, this puppy is only half done! 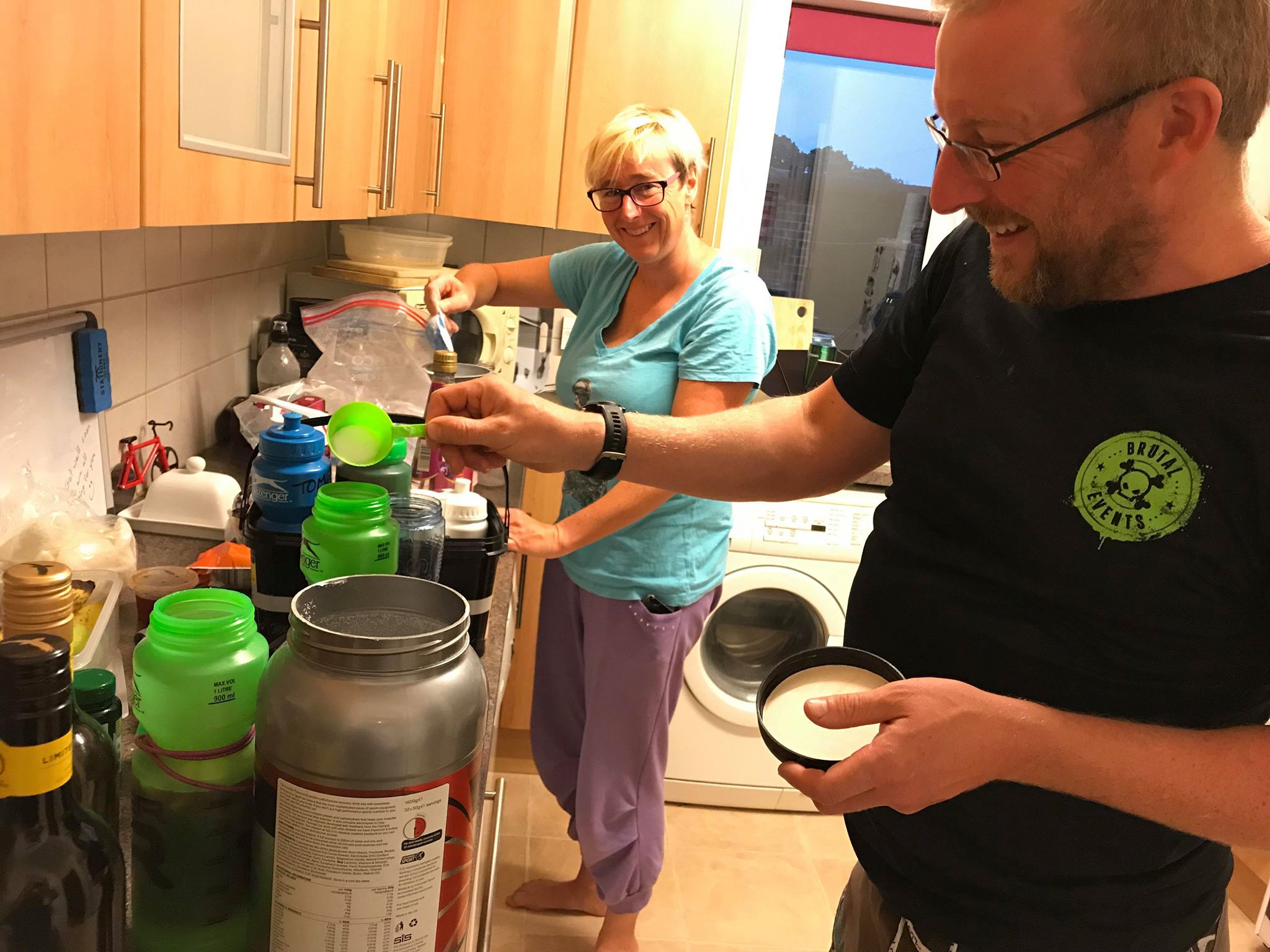 Sunday morning, really surprised I wasn’t really sore or hurting at all. Weird. I know I didn’t swim as far as perhaps I would normally expect in 7 hours…but there was a current pushing you back and I was taking it easy for the second day…but still, I shouldn’t be feeling this good should I? 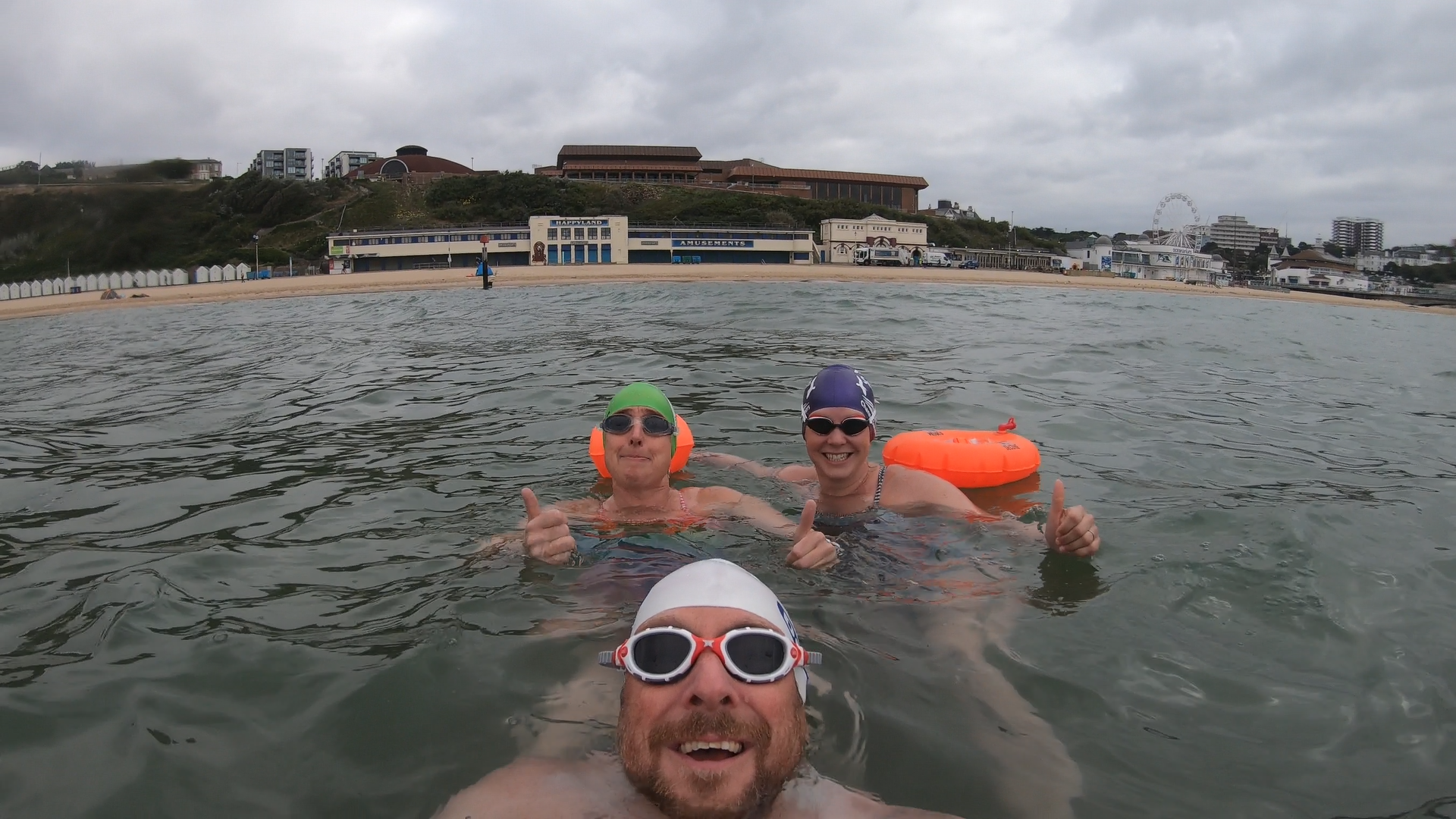 We jumped in under cloud…but the water was still 18+. It was reasonably windy and quite choppy so it was a bit difficult to get into a rhythm but the first half hour was assessing the body….and playing with the barrel jellyfish that seem to have come in. Was surprised we didn’t see them the day before when it was flatter but nice to see something!  Pleasingly, pretty much all good. I was however feeling a little chill which I’m putting down to the body working quite hard the day before and being in recovery mode. That’s how this swim is supposed to work tho, push the body when its tired. Again, hour and a half lap followed by 45 min feed. Easy back with the wind, hard out with the chop constantly slapping in the face. No point getting annoyed, it is what it is, swim the best you can and deal with it; it could be like that on the day! After 5 hours I was getting a bit tired but no way I was even close to getting out, no dark patches, no hard points, just a nice easy swim to finish it off. 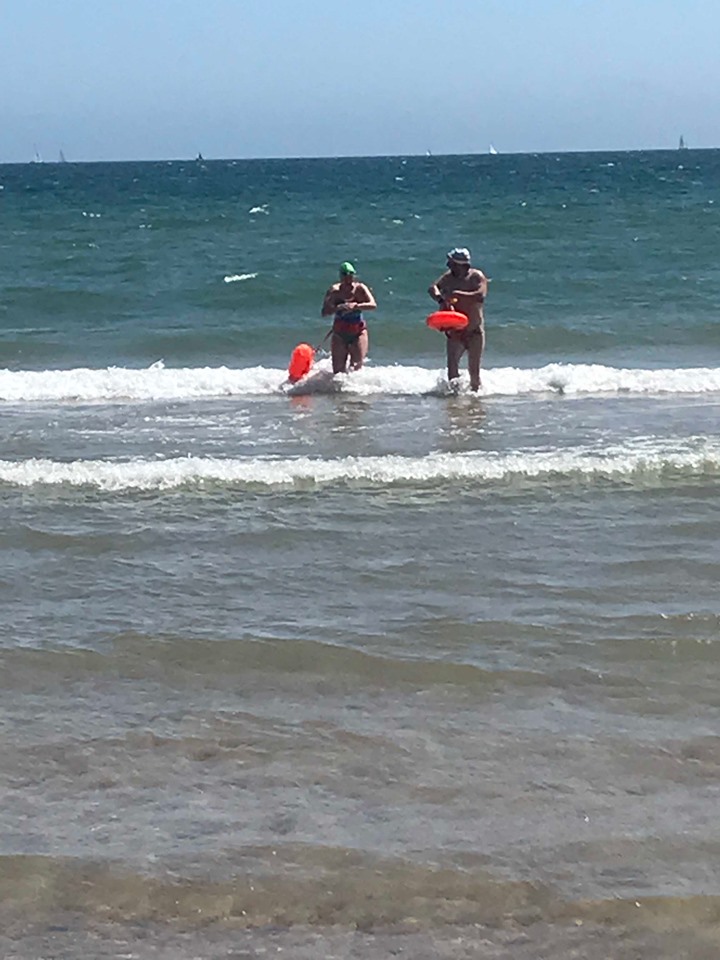 Again, too easy. It was force 4 wind at the end so slapping us in the face with chop but the temperature and support made it so easy, it wasn’t ever in doubt. Slightly bittersweet as I was kind of hoping it would have been a bit harder to put in a mental box for later labelled ‘really really hard training swim’. As it was, Its in a box labelled ‘really easy really long training swim’. It might help me mentally if it gets tough on the day…or it might not! No matter, big back to back, done. That’s the last big box that needed ticking. Really consistent and long build up, monster big swim (G24), big back to back/split channel. Now in a really good place mentally and physically and in theory, one month exactly til my window opens to get a nice long rest and tapering down period to go into this fully 100% as ready as I can be. 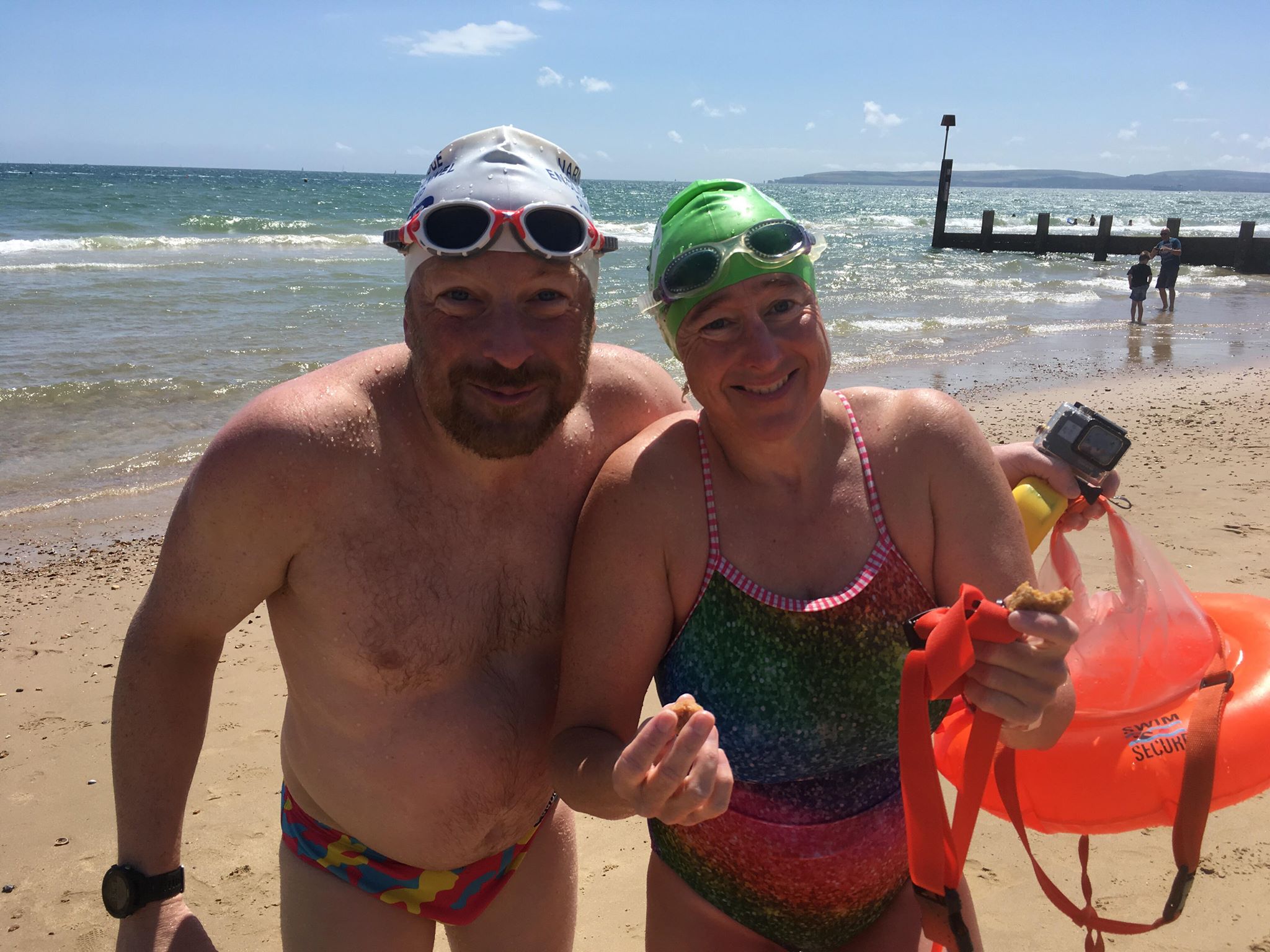